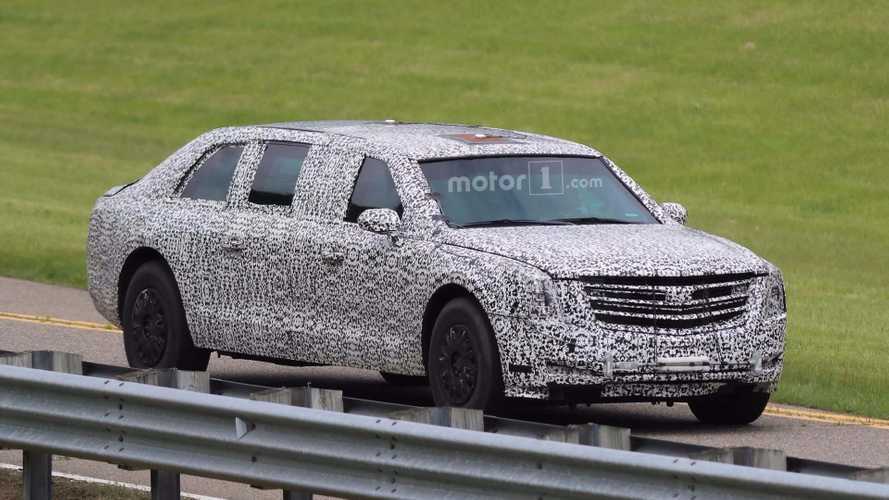 The president's new Cadillac limousine is something you absolutely get right the first time.

The clearest spy photos yet of President Trump’s new ride are out, and as we can clearly see the beefy Cadillac is, well, beefy. That’s because the car likely rides on some kind of heavy-duty frame, possibly sourced from one of GM’s big commercial trucks. It needs such strength to support all the extra armor, bulletproof glass, and other unknown secret-agent type gear the rolling White House no doubt wields.

As you would expect, all that gear adds a little bit of weight to the Caddy. For obvious reasons there aren’t specific figures published on the presidential fleet of limos, but each car is believed to weigh between 15,000 and 20,000 pounds. With that kind of mass, it’s widely speculated that top speed isn’t what you’d call brisk. But with bulletproof windows thought to be five inches think, Trump’s ride should be able to withstand pretty much any kind of small arms fire, and a few big arms to boot.

Even though it’s surely no Cadillac underneath, the exterior bits leave no doubt that the President of the United States rides in an American luxury car. The limo is seen sporting Cadillac’s new grille and trademark vertical headlights that seem to draw inspiration from the CT6 sedan. There’s a bit of Cadillac design flavor in the sides as well, though the proportions are certainly skewed because in actuality, this limo is far taller than any GM sedan.

It's the back where things get interesting, as the styling is unlike anything we’ve seen thus far from the Cadillac stable. The rear pillar is thicker and sports a steeper rake than the previous limo, giving Trump’s forthcoming ride a profile not unlike a Rolls-Royce. Perhaps we’re glimpsing a new styling feature for GM’s luxury division that will appear on future models.

Or perhaps the longer tail is built to accommodate mobile internet servers, so the president can have continued social media conversations via Twitter during power outages or global thermonuclear war.