Red Bull Racing’s Daniel Ricciardo and Max Verstappen have been spending some time at the Red Bull Ring ahead of the Austrian Grand Prix in July, but the drivers haven’t been exclusively working at shaving time off their laps. The racers let off some steam by climbing into a pair of camper-towing Aston Martins for a little race around the circuit. 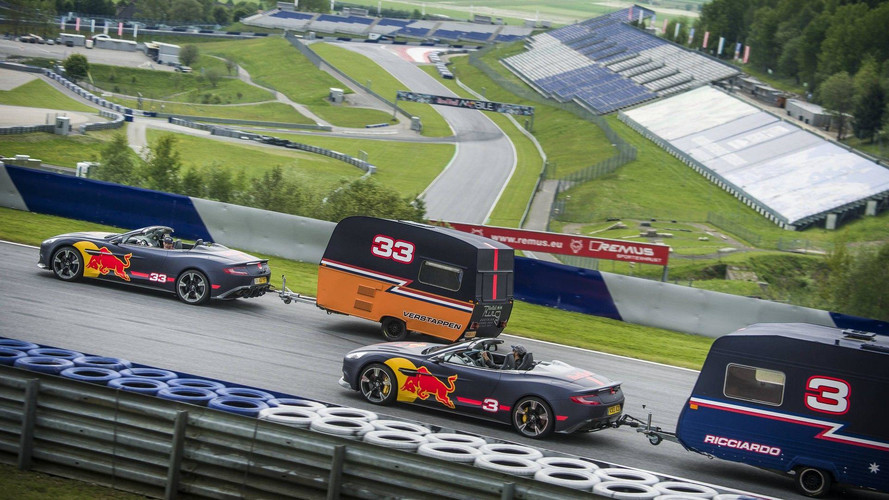 Ricciardo climbs into an Aston Martin Vanquish Volante with 568 horsepower (424 kilowatts), and Verstappen has a more potent Vanquish S Volante with 595 hp (444 kW). Don’t worry about the race not being even because these laps are more about having fun than finding the faster driver. Plus, towing the campers likely evens the playing field.

These custom-painted trailers feature the liveries of each driver. According to Red Bull, they each weigh around 882 pounds (400 kilograms). For better performance around the track, they wear Pirelli slick tires. However, the sticky rubber doesn’t help much because these campers have one wheel high in the air in nearly every corner as the racers fling the Aston Martins around the circuit.

The guys can barely stop from laughing while engaging in this automotive lunacy. The race’s winner doesn’t really matter, and the campers are looking rough by the end of the laps. Neither trailer ends the event in one piece.

Aston Martin and Red Bull Racing are currently forging a closer relationship as the two companies work together on the Valkyrie hypercar. The machine arrives in 2019 with a Cosworth-built 6.5-liter V12 with hybrid assistance producing a total output of 820 hp (611 kW). The pair will build just 175 of them, including 150 for the road and 25 hardcore, track-only examples.

Watch a caravan race with an F1 twist

There’s nothing wrong with a bit of healthy competition between team-mates and Red Bull Racing’s Daniel Ricciardo and Max Verstappen never shy away from a challenge.

So who would come out on top when the speedsters got behind the wheel of an Aston Martin super car attached by a tow bar to a caravan?

Watch the video clip below to find out.

Taking a break from driving their RB13s, it was a change of scene for both Dan and Max to take a spin in one of James Bond’s favourite motors. Dan’s machine was the Aston Martin Vanquish Volante with 576hp and an acceleration of 0 to100kph in 3.8 seconds. Alongside the Australian on the track was Max’s slightly beefier Aston Martin Vanquish S Volante with its 603hp taking it to 100kph in 3.5 seconds. Each Volante came with the optional extra of a tow bar.

Impressive in their own way were the caravans, weighing around 400kg apiece and mounted on slick Pirelli tyres for added grip on the Red Bull Ring’s nine turns.

Dan and Max will be back in their RB13 when the Austrian Grand Prix is held at the Red Bull Ring on July 9.

You can join the guys at the track by getting tickets from www.projekt-spielberg.com. As well as the race itself, there’s plenty to enjoy in Spielberg such as pit lane walks, the Legends Parade, music concerts and much, much more.

See you in Spielberg.