The wider, the better.

Novitec, one of the leading tuning companies focused on Ferrari and Lamborghini models, is presenting its new line of aftermarket body improvements for the 488 GTB and 488 Spider duo, called the N-Largo.

Both the hardtop and convertible are 5.5 inches (14 centimeters) wider at the rear axle compared to the standard production variants coming from Maranello. At the front, the regular fenders have been replaced with custom-made wings and wheel-arch liners to fit the 21- and 22-inch NF6 NL wheels manufactured using hi-tech forging technology. The alloys are wrapped in high-performance 335/25 tires.

All those changes have not only visual impact, but also improve the air flow to the brakes and engine. For example, three gill-shaped slots have been integrated into the top of the front fenders to help venting the air heated by the brakes from the wheel wells as quickly as possible. For improved cooling of the rear brakes, the N-Largo rocker panels feature new air intakes.

Of course, Novitec has also worked on the V8 engine of the 488 family and is offering two plug-and-play control units, which finely retune its performance. Integrated into the engine electronics, they operate the unit with reprogrammed mapping for injection and ignition, as well as with modified boost pressure control.

In addition, a custom high-performance exhaust system has been developed to “optimize the performance further while giving the vehicle an even more thrilling exhaust note.” All those improvements bring additional 102 horsepower (76 kilowatts) for a grand total of 772 hp (568 kW) at 7,950 rpm. Also, the peak torque now stands at 658 pound-feet (892 Newton-meters), 132 Nm (97 lb-ft) more than before. 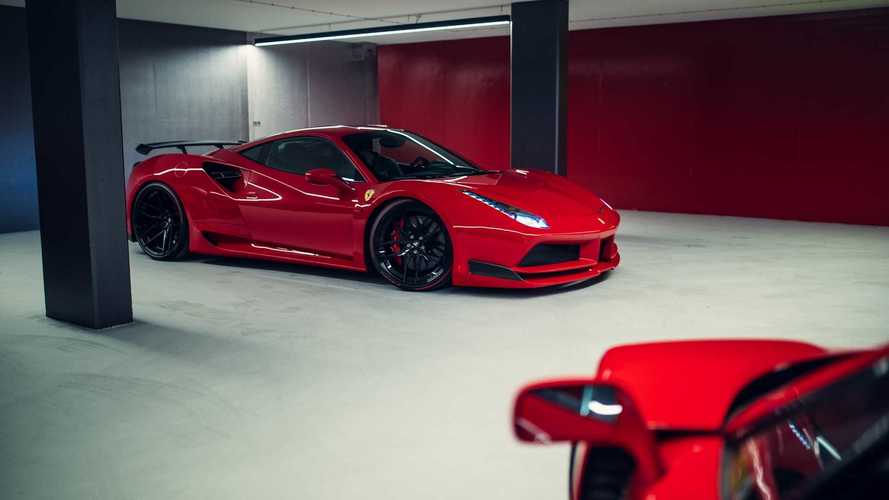 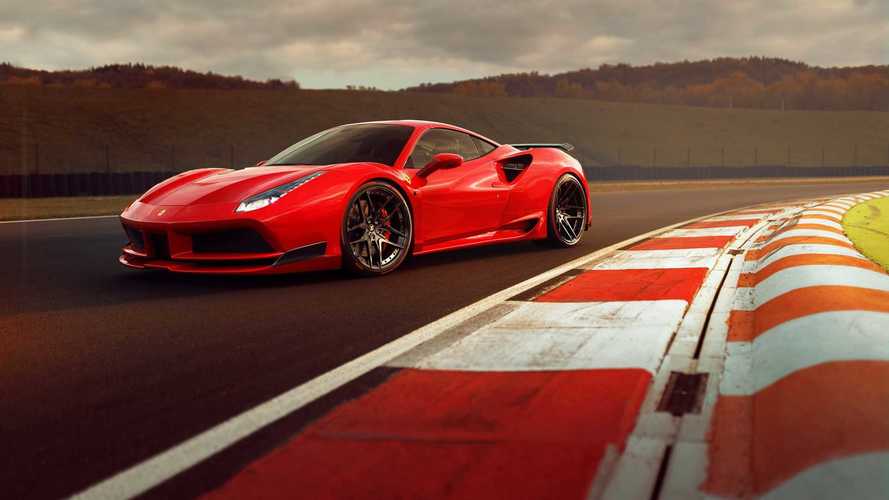 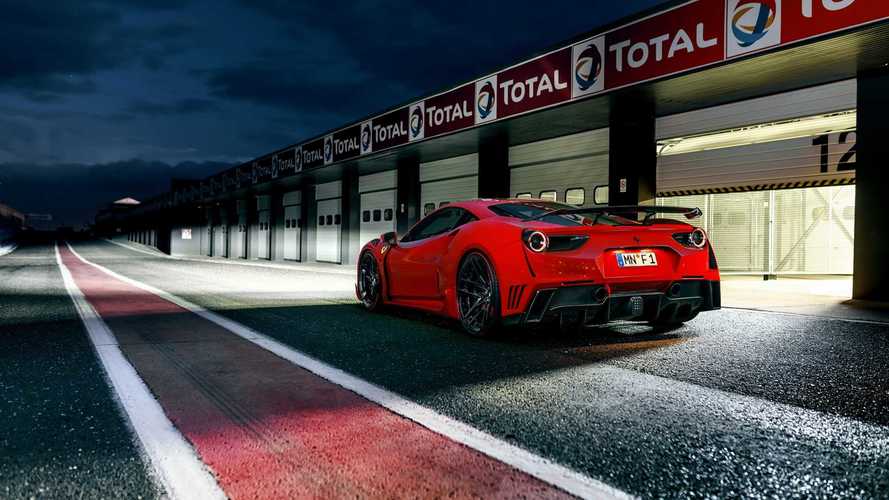 Additional features include an upgraded suspension with front lift system controlled at the touch of a button. Novitec also says the interior of the series can be personalized in every aspect to the personal preferences of the N-Largo owner.

NOVITEC N-LARGO is the name of a spectacular widebody version for the two Ferrari mid-engine models 488 GTB and 488 Spider now presented by NOVITEC, the world’s leading refinement specialist for the sports cars from Maranello. Only eleven N-LARGO widebody versions of each body style will be built.

The NOVITEC body conversion impresses with its sophisticated combination of thrilling design and aerodynamic efficiency evident in every detail. It is made from feather-light yet high-strength carbon fibers. In addition, the N-LARGO is fitted with tailor-made and staggered three-piece NOVITEC NF6 NL hi-tech forged wheels with diameters of 21 and 22 inches. Additional features include an upgraded suspension with Front Lift system and a performance boost to 568 kW / 772 hp, which raises the top speed of the exclusive two-seater to 342 km/h.

By customer request, NOVITEC also tailors the cockpit in every aspect to the personal preferences of the N-LARGO owner.

A width of 209 centimeters: With this impressive figure, the NOVITEC N-LARGO widebody version tops a production Ferrari 488 by precisely 14 centimeters at the rear axle. To this end, the NOVITEC designers styled thrillingly shaped side elements, which are seven centimeters wider than the production fenders on each side of the vehicle.

The larger wheel wells, for which NOVITEC designed precise-fit wheel-arch liners, then offer space for the NF6 NL wheels developed specifically for the NOVITEC N-LARGO. They have a three-piece design and are manufactured using hi-tech forging technology. What is more: The widebody version allowed designing an extremely concave wheel center with five intricate double-spokes. The rims of size 12Jx22 make full use of the newly created space with high-performance tires of size 335/25 ZR 22.

To widen the track and emphasize the hourglass shape of the sports car, the front fenders are replaced with tailor-made N-LARGO fenders. They add seven centimeters to the width of the two-seater at the front axle. To achieve a markedly wedge-shaped appearance, NOVITEC opted for wheels of size 9Jx21 with tires of size 255/30 ZR 21 for the N-LARGO.

Fascinating looks were not the only objective in the development of the front and rear fender flares. The performance specifications also called for improving the air supply for brakes and engine. Three gill-shaped slots were integrated into the top of the front fenders, which help venting the air heated by the brakes from the wheel wells as quickly as possible. The rear side elements incorporate larger air vents for the engine bay. For improved cooling of the rear brakes, the N-LARGO rocker panels feature sophisticated air intakes. In addition, these aerodynamic-enhancement components direct the airstream between the N-LARGO fenders at the front and rear axle without turbulence.

Of course, the bumpers and spoilers of the NOVITEC special model play a key role in its aerodynamic properties and its looks. The N-LARGO front and rear bumpers, which replace their production counterparts, were not only designed to adapt the flares.

The front bumper and the attached low-slung front spoiler, which like the side flaps is optionally available with a naked carbon finish, lend the two-seater a decidedly aggressive front-end design. In addition, the shape optimized in the wind tunnel reduces aerodynamic lift, which further increases the handling stability at high speeds.

At the rear, the combination of the diffuser integrated into the N-LARGO bumper and the large rear airfoil generates additional downforce at high speeds.

Other hallmark NOVITEC features are the black side indicators, reflectors and the likewise black LED third brake light.

To round off the thrilling appearance of the N-LARGO and further enhance the driving dynamics, NOVITEC installs special sport springs to lower the ride height of the vehicle by up to 35 millimeters. The optional Front Lift system on the front axle makes it easier to navigate steep ramps as can be found in parking garages or speed humps. At the touch of a button, the hydraulic ride-height adjustment raises the front axle by about 40 millimeters. The vehicle reverts to the drive position at a second touch of the button or automatically upon reaching a speed of 80 km/h.

As an ideal complement to the spectacular looks of the N-LARGO, NOVITEC also offers various performance kits for the 3.9-liter twin-turbo V-8 engine of the 488 model series. The special feature of the engine tuning is that it can be activated in a flash with the Manettino switch on the steering wheel and can just as easily be reset to the standard output.

The centerpieces of the engine tuning are the two NOVITEC N-TRONIC plug-and-play control modules, which are integrated into the engine electronics of the two-seater. They operate the eight-cylinder with reprogrammed mapping for injection and ignition, as well as with modified boost pressure control.

The installation of a NOVITEC high-performance exhaust system is advisable to optimize the performance further while giving the vehicle an even more thrilling exhaust note. The fully heat-insulated exhaust system comes in various versions, including an especially lightweight INCONEL variant. An electronic sound management system is also optionally available, as are 100-cell sport catalysts.

In the ultimate tuning stage, the forced-induction eight-cylinder with NOVITEC engine tuning puts out 76 kW / 102 hp more than the production engine and also adds 132 Nm of torque for a new peak of 892 Nm at a low 3,250 rpm. The increase in power output to 568 kW / 772 hp at 7,950 rpm naturally benefits the performance on the road: From rest, the two-seat sports car accelerates to 100 km/h in just 2.8 seconds. Top speed increases to 342 km/h an.

The NOVITEC power upgrade delivers not only even better performance figures: Just as fascinating are the even more direct throttle response and the even more powerful in-gear acceleration on the road.

NOVITEC also offers custom exclusivity for the interior. The cockpit of an N-LARGO can be meticulously trimmed with leather and Alcantara in any conceivable color and desired upholstery design.