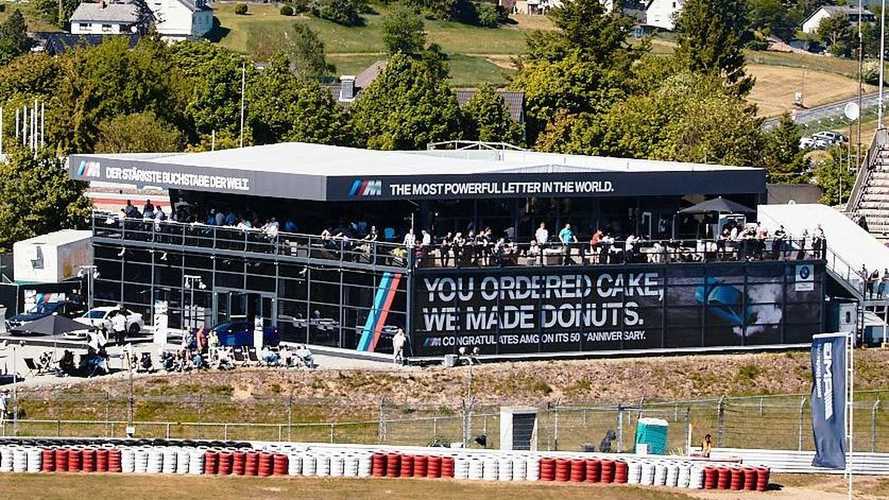 Who said Germans don't have a sense of humor?

About a year ago, Mercedes released a rather cheeky clip (see below) on Instagram to congratulate BMW on the joyous occasion of its centenary. The video was actually a double entendre taking into account at the end it included the message “The previous 30 years were actually a bit boring.” Mercedes was obviously trolling BMW for entering the business three decades later than its archrival based in Stuttgart.

Now, Bayerische Moteren Werke through its M performance division is returning the “favor” by doing something similar at the Nürburgring track in Germany where it has a huge billboard to applaud Mercedes for half a century of AMG history: “You ordered cake, we made donuts. M congratulates AMG on its 50th anniversary.” To the right of the message appears to be an M2 shredding its rear tires while doing “donuts.”

AMG’s 50th anniversary festivities at the ‘Ring include showing off a limited-run version of the track-only Mercedes-AMG GT3 Edition 50 wearing a special livery never seen before on an AMG-branded car. In addition, the company with the three-pointed star logo is being more generous with details about the F1-derived Project One hypercar by finally deciding to release many of its juicy specs.

BMW is also quite busy this weekend as it’s not only previewing the revived 8 Series with a concept, but it’s also providing a glimpse into the future of the first-ever M8. The first generation of the high-end coupe came close to receiving a full-on M version in the early 1990s, but ultimately the plans were dropped — even though a prototype was actually built. Now, BMW is attempting to make up for lost time by slapping on the “M8” badge on its next posh grand tourer. In addition, the M8 will receive a track-only derivative set to take the shape of a GTE-spec race car for Le Mans.