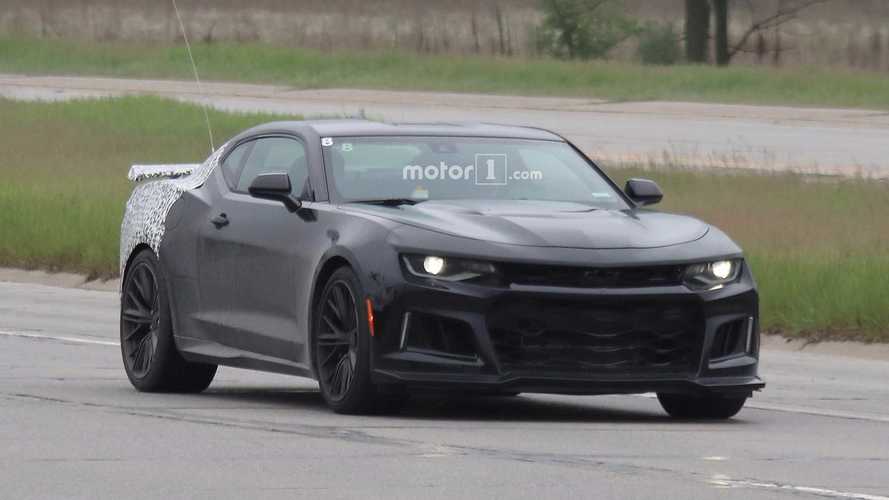 Everything from the 1LT to the ZL1.

Leading up to the Camaro’s mid-cycle refresh in 2019, Chevy is rolling out the first prototypes for its new and improved sports car. Already we’ve seen the base Camaro testing high in the mountains of Colorado, but now we get a first look at the entire updated lineup on road, and in the flesh.

Our spy photographers recently caught up with a pack of new 2019 Camaros testing on public roads. Everything from the 1LT, to the SS, to the SS Convertible, to the new ZL1. Though we can’t make out their final appearances – damn camouflage – we can take away some distinguishing cues.

Apart from a few minor updates to the front and rear fascia, it looks like the high-horsepower ZL1 will go mostly unchanged. A healthy amount of camouflage on the rear keeps us from guessing its final design. The SS and SS convertible will likely see the most changes, camo covering up their front and rear fascias pretty extensively.

Like the SS, the 1LT is well covered up on the front and rear. There is one new feature, though, that’s pretty obvious: the wheels. The usual five-spoke rims are replaced with a new setup that gives the package a more aggressive look.

While the lineup will only see some minor aesthetic changes overall, it’s under the hood where most of the major updates will take place. The lineup is expected to adopt the new 10-speed automatic currently found on the ZL1. A few amenities to the cabin, and even more technology borrowed from the Cadillac ATS will carry over.

The SS and ZL1 will likely see some minor power bumps, but more importantly, rumors suggest that Chevy will revive the Z/28 moniker for the 2019 model year. The new Z/28 will well exceed the 505-horsepower (376 kilowatts) offered on the outgoing model. We’ll know more details when the 2019 Camaro makes its debut, likely early in 2018.