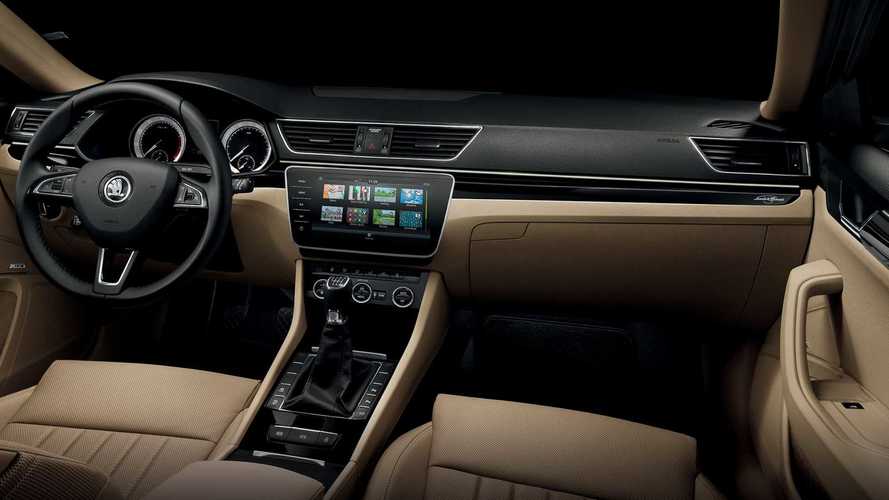 Still stuck with bi-xenon headlights, though.

Skoda is giving its flagship model a modest revision for the 2018 model year bringing the new infotainment systems featuring a glass design. Already available on the Kodiaq and the facelifted Octavia, the new screen has grown in size from 6.5 to 8 inches in the case of Bolero and Amundsen whereas the top-spec Columbus has been enlarged from 8 to 9.2 inches. The entry-level Swing setup is also being promoted from a previous 5-inch setup to a more generous 6.5-inch diagonal.

Superb Facelift Is Out:

Elsewhere, Park Distance Control is making its debut on the Superb and comes along with an extended function of the Manoeuvre Assist system, which is now smart enough to detect obstacles in front of the car. Should the driver ignore the audio and visual warnings, the system will automatically activate the brakes to reduce the possibility of an impact.

The 2018MY also sees the introduction of an optional massage function for the driver’s seat, but only if you get the more expensive electrically adjustable version with ventilation and memory functions. Interestingly, one new and rather unexpected feature is Digital Voice Enhancement, which refers to a microphone mounted in the front allowing the driver and the passenger to talk to those on the rear seats.

Skoda says the Superb’s cabin is now quieter than ever thanks to the new acoustic film located between the two glass surfaces of the front side windows. Also inside, the roofline for the top-of-the-range Laurin & Klement model can now be ordered in black. The L&K gets chrome strips on side buffers and doors for a more high-end feel. A set of 19-inch “Acamar” alloy wheels is being introduced while later this year Skoda will also begin to sell the Superb with a new metallic shade called “Velvet Red.”

While the updates are more than welcome, we find it a bit odd the Superb still has bi-xenon headlights whereas the Octavia, Kodiaq, and the newcomer Karoq feature an all-LED setup. Chances are the switch to light-emitting diodes will be made with the Superb’s mid-cycle refresh slated quite possibly for 2018.

Care Connect: newly included as a standard from the Ambition
› Infotainment: up to 9.2" screen in the glass design and SmartLink+
› Safety: Advanced function Manoeuvre Assist detects obstacles in front of the vehicle
› Comfort: Driver's seat with a massage function including ventilation and memory function
› Features: New 19-inch alloy wheels underscore the elegant appearance of the ŠKODA Top model

Mladá Boleslav, 26 May 2017 – ŠKODA upgrades the flagship of its model range. From the end of May 2017 the ŠKODA SUPERB and ŠKODA SUPERB COMBI will be rolled out with numerous innovations. These includes automatic emergency call as additional security - and comfort features, and extended connectivity solutions.

Care Connect with automatic emergency call
With the new model year, the ŠKODA SUPERB limousine and ŠKODA SUPERB COMBI comes with Care Connect as a standard from the equipment version Ambition – regardless of the choice of infotainment system.

The most important feature of the Care Connect is the automatic emergency call, which is activated following an accident if a restraint system has been triggered. The vehicle establishes a voice and data connection to an emergency call centre and transmits all the necessary data. The emergency call can also be initiated manually via a button in the roof module.

In addition, remote access to the vehicle is now possible via the ŠKODA Connect App. The smartphone can inform the driver, among other things, whether the windows and doors are closed or the lights are off. The parking position function shows the location of the vehicle, the "Honk & Flash" function makes it easier to find the car by activating the horn and hazard lights.

Infotainment: 9.2" screen in the glass design and SmartLink
Numerous functions can now be operated with optimised infotainment systems for the ŠKODA SUPERB. The display of the Columbus navigation system has grown from 8 to 9.2 inches and the system Swing from 5 to 6.5 inches. In addition, the glass design enhances the high-resolution displays.

With the SmartLink+ system on board, the ŠKODA SUPERB now offers additional possibilities for networking between the vehicle and smartphone. SmartLink+ brings navigation, infotainment and communication apps from the mobile phone into the car and also provides vehicle data for the evaluation on the smartphone.

Driver assistance systems: Park Distance Control
ŠKODA SUPERB is helping to avoid dents while parking. This is ensured by the Park Distance Control system with extended function Manoeuvre Assist, which now also detects obstacles in front of the vehicle. The system not only warns the driver with optical and acoustic signals but also brakes the vehicle automatically if necessary.

Driver´s seat with a massage function, improved communication climate and noise level
As a comfortable travelling vehicle for the whole family, the character of the ŠKODA SUPERB has been further strengthened with new equipment features. The optional massage function for the driver's seat, which is available with the electrically adjustable variant, including ventilation and memory function, ensures increased comfort on long distances. Also the communication among occupants is improved with Digital Voice Enhancement, which transmits the driver's and front passenger's voice to the passengers in the rear via a microphone in the cockpit. Additional improvements also contribute to lower noise levels - the front side windows are newly available with an acoustic film between the two glass surfaces.

The new design of the 19-inch light-alloy Acamar rims underscores the elegant appearance of the Czech top model. In addition, the revised ŠKODA SUPERB can be ordered later this year in a new elegant car body metallic colour Velvet Red.

Chrome strips on side buffers and doors and a black interior ceiling will be available for the L&K equipment version making the refined top version of ŠKODA’s flagship even more impressive from the end of May 2017.