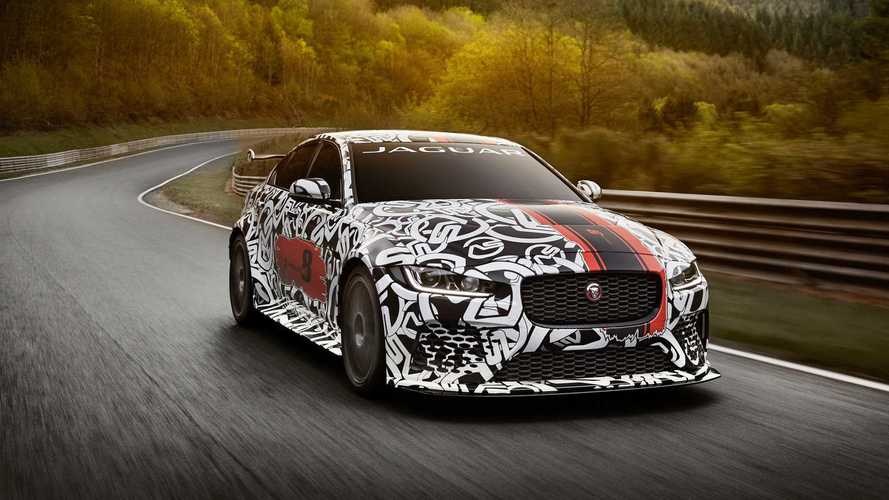 With 600 horsepower on tap, the extreme XE aims to deliver supercar levels of performance in a sedan.

Jaguar Land Rover’s Special Vehicle Operations is at it again. After the special F-Type Project 7 from 2014, SVO is now giving the XE compact sedan a shot of testosterone and is taking “aerodynamics and performance engineering to another level.” Those are indeed some big words used to characterize the supercar disguised as a sedan, but with 600 horsepower coming from a supercharged 5.0-liter V8 engine, the special edition should be able to live up to the promise.

To keep it exclusive, Jaguar has announced only 300 units will ever be made and all of them are going to be hand-assembled by SVO at its Technical Center located in Coventry, U.K. It’s destined to become a global model and will celebrate its premiere at the Goodwood Festival of Speed on June 30. Full technical specifications and details about performance are going to be published two days sooner.

It goes without saying it’s going to be way quicker than the current range-topping XE. With a supercharged 3.0-liter V6 engine, the 380-hp XE S needs 4.8 seconds until 60 mph (96 kph) and maxes out at 155 mph (250 kph). Taking into account Jaguar points out the new XE SV Project 8 will be the brand’s “most extreme performance” car ever, perhaps it will be both quicker and faster than the F-Type SVR. As a reminder, the hardcore coupe does the sprint in 3.5 seconds and can hit a maximum velocity of 200 mph (322 kph).

The all-wheel-drive XE SV Project 8 will prove to be a worthy adversary for the likes of the BMW M3 with the Competition Package and the Mercedes-AMG C63 S, though these two are regular production models. Chances are Jaguar will add a permanent member to the XE family later on by launching an SVR version to take on the Germans permanently, but probably it won’t be as intense as the Project 8.

With the most highly tuned version of Jaguar Land Rover’s five-litre supercharged V8, Project 8 will become the second Collectors’ Edition vehicle from SVO, following the successful launch of Jaguar F-TYPE Project 7 in 2014. No more than 300 cars, all hand-assembled at SVO’s Technical Centre in Coventry, will be created for sale worldwide.

The time is right for SVO to produce the most extreme performance road car in the history of Jaguar. The SVO team is possessed by the spirit of performance and committed to creating the most thrilling driving experience imaginable. Our clients worldwide were thrilled by the F-TYPE Project 7. The new XE SV Project 8 takes aerodynamics and performance engineering to another level – it is conceived for enthusiasts and the most discerning collectors. The price for such an extreme performance sports car available in strictly limited numbers will reflect that.

Full specification details for Jaguar XE SV Project 8 will be revealed at www.Jaguar.com on 28 June 2017, ahead of its world dynamic debut at Goodwood Festival of Speed in West Sussex in the UK on 30 June.