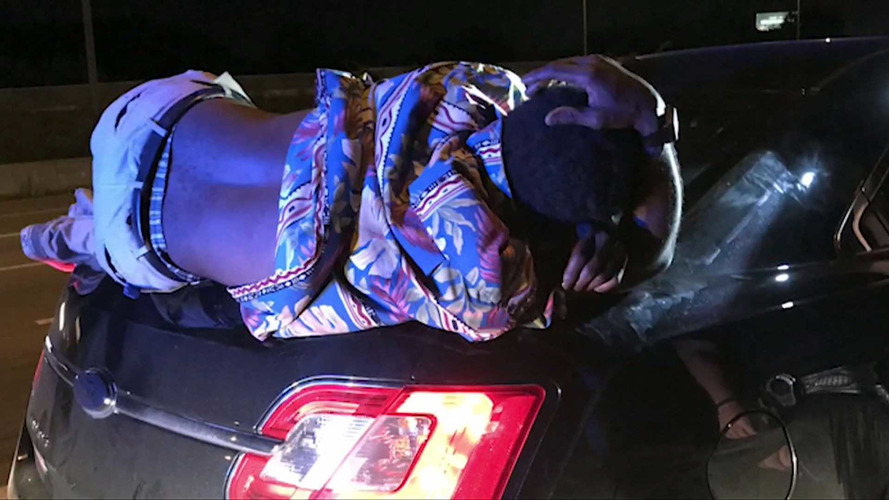 Just when our faith in humanity is being restored, this happens.

Say what you will about the internet and how it’s changed the way we communicate. Without it, you may not have the pleasure of reading about a drunk man who passed out on the trunk of a car, and the dolt of a driver who drove 14 miles without knowing he was there. Is this seriously for real? Fox13 News in Memphis says yes, but boy do we have a lot of questions.

Before we get to that, let’s review the story that’s sure to become an urban legend. Carl Webb and his wife got into their late model Ford Taurus after leaving Barbeque Fest last Thursday night in Memphis, Tennessee. Webb told the news station that he had backed into the space, and that the sunshade in the back window was stuck in the up position. With it being dark out, neither him nor his wife noticed anything out of the ordinary. It was only when a police officer pulled Webb over – 14 miles from when the trip started – that he learned of the drunk on the trunk (sorry, we couldn’t resist).

Now for the questions. How do you not notice a person on the trunk of your car? If that’s truly the case, the driver sorely needs to visit the eye doctor, followed by a reality check on the fundamentals of basic awareness. And nobody else on the road noticed a dude on the back of car? We will assume the officer involved was summoned because somebody called the police, but the story from Fox13 offers no such detail, and even says the Memphis Police Department hasn’t responded to questions. Then again, if Webb was oblivious to a person on the trunk, there’s every reason to believe he was equally oblivious to people trying to tell him as much.

Lastly, how does an intoxicated, unconscious person not fall off the short decklid of a Ford Taurus? According to the report, Webb credits the small lip on the trunk as holding the man in place. We simply call BS on that – even gentle acceleration and steering inputs would make it nearly impossible for such mass to remain on the trunk. We’re not suggesting this didn’t happen – after all there are photos and a video to prove otherwise.

The story just doesn’t add up in our book. At the very least, this guy would need to be conscious enough to hang on. And it seems very strange that the driver wouldn’t also be subject to some measure of investigation, if for no other reason than to question how the hell he didn’t notice a person laying across his car – a person that must have been alert enough to hang on.

What do you think? Could this have happened just the way it’s been reported, or is there more to this story that hasn’t come to light?