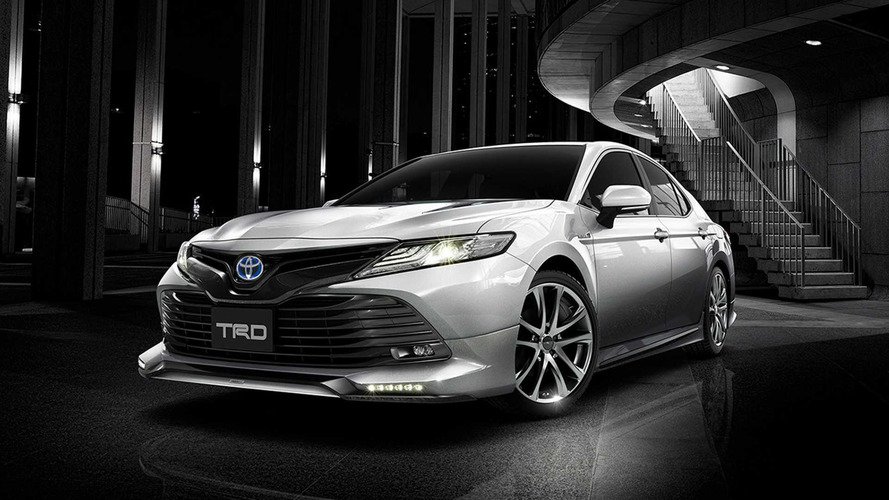 They probably won’t be U.S. bound, but never say never.

Remember when the Toyota Camry was the epitome of boring transportation? Toyota has been gradually upping the ante on the Camry’s dynamic appeal for some time, and the for new-for-2018 model we saw at this year’s Detroit Auto Show left us suitably impressed both outside and within. And now we have the first glimpse of two new Camry variants – Modellista and TRD. That’s right – a proper TRD Camry.

Details are very slim as Toyota has only offered up a glimpse of the two packages. The Modellista is clearly the more sophisticated of the two with small tweaks to the front fascia, complimented by spoke wheels and revamped lower body trim. The TRD body kit is a bit more menacing, adding a prominent splitter to a new fascia that also features integrated lamps down low, with added ground effects along the side and rear. It’s a balanced look of aggression that doesn’t get all shouty about it, and it serves the Camry well.

At this point it’s not clear if the packages will be more than skin deep. Toyota hasn’t yet released official performance figures or power ratings for the 2018 Camry, but its range-topping 3.5-liter V6 is expected to produce 295 horsepower, mated to an eight-speed direct-shift automatic transmission. The new model also benefits from a retuned suspension that’s said to provide a more dynamic driving experience without sacrificing comfort. So even if the TRD Camry is strictly an aesthetic upgrade, it should still have the lungs and legs to be an entertaining machine.

The catch is that both the Modellista and TRD variants may never make it to U.S. shores. The model debut is based on the Japanese domestic market version of the Camry, suggesting it will remain forbidden fruit to the North American market. Then again, Toyota’s crazy 850-horsepower sleeper Camry from a couple years ago combined with its recent 230 mile-per-hour Land Cruiser suggest the manufacturer is serious about recasting its image with a slant towards performance. Bearing that in mind, we’ll just say that anything is possible.