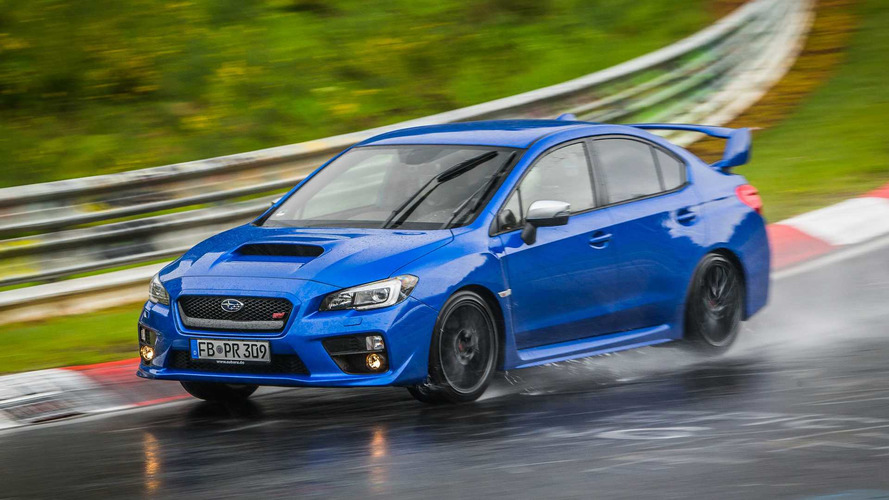 Or, how I didn’t die while taking in some soaking wet laps of Germany’s infamous Nürburgring.

I have no idea how fast I’m going. I don’t even care. Right now, my only concern is keeping the Subaru WRX STI rubber-side down as I slide into another soaking wet corner of the Nürburgring, traction control light flashing, quick-reflex countersteer motions keeping me safe within the confines of the smooth pavement. In this moment, I am equal parts thrilled and terrified. With each turn comes another challenge, another ass-clenching moment as I work to find the balance between the limits of traction and my own bravery.

I don’t care how fast you think are while lapping the ‘Ring in Gran Turismo, absolutely nothing can prepare you for the real thing.

The terrible weather isn’t just killing my buzz out on the track, it’s bringing down the mood of the whole Subaru team. I’m not just here to fling the company’s winged wonder ‘round the ‘Ring, I’m here because Subaru wants to set a lap record for four-door cars with a specially modified WRX STI, and, well, the heavy rain is quite literally dampening the racing team’s collective hope. I’ll be able to tell you more about the record attempt in the near future, but suffice it to say, Mother Nature rained on this parade.

That left me and a handful of other journalists with an empty Nürburgring, a couple of bone-stock 2017 Subaru WRX STI sedans, and a trio of pro ‘Ring runners who were more than happy to guide me around the Green Hell. Rain or no, there are certainly worse scenarios to list when describing “Friday at work.”

There are also worse cars to have at my disposal for a few laps in the rain. Subaru’s WRX STI lends itself to the sort of foul-weather tomfoolery I’ll be enjoying today. Even before my laps on the wet tarmac, a tour of the ‘Ring’s best vistas takes me down dirt and gravel access roads to various fenced-off corners, a quick goose of the throttle in first gear providing tail-wagging, mud-slinging, antics. This is a car that’s as at home on a two-track trail as it is while carving a line through the Karussell, and considering the cold, wet, downright dangerous conditions, I’m happy the STI’s all-wheel-drive traction is so easy to exploit.

With each turn comes another challenge, another ass-clenching moment as I work to find the balance between the limits of traction and my own bravery.

The STI feels like an old friend at this point; its operation is familiar. It allows me to actively focus more on the directions coming from Killian, my instructor, in the passenger seat. The turbocharged, boxer engine pulls hard as I wind up third gear and upshift into fourth, just as the ‘Ring’s big straight gives way to a long, downhill lefthander. The STI’s 305 horsepower and 290 pound-feet of torque are ample, with enough low-end power to keep me humming along in fourth gear most of the time, occasionally going down to third after a quick left-right-uphill maneuver. Fifth gear is only used during higher-speed sections, or as a final, let’s say, upshift of relief as I get back to that superlatively long straightaway. You might only see sixth if you’re a true pro.

The intrinsic goodness of the STI makes it a worthy companion here. It’s the little things that I’m thankful for in the moment: great visibility; accurate, nicely weighted steering; a clutch with a low take-up point and solid feedback that makes quick shifts a breeze. I’m even happy about smaller details, like the fact that the headrests don’t push my head forward while wearing a helmet, and that the stock seats are supportive enough to keep my body in place.

With more time and dry pavement, I could play with the STI’s trick driver-adjustable center differential settings, perhaps giving my all-wheel-drive car a bit more of a rear bias. But for the sake of these drenched laps, I’m letting Subaru’s system do the guess work for me, mitigating traction loss and skittishness as best it can, the actual levels of grip varying from corner to corner. At certain points of the track, I find myself in a four-wheel drift going into a turn, Killian in the passenger seat pointing out the signs and barrier markers that serve as my entry and exit points for each turn. His instructions are simple, and arrive in direct, rapid succession: “Short braking. To the right. Go left. Straight. Up.” I’m happy to have him in the right seat. One wrong move, and I'll be the guy in one of those horrific YouTube 'Ring-wreck videos.

I don’t care how fast you think are while lapping the ‘Ring in Gran Turismo, absolutely nothing can prepare you for the real thing. Yes, some of the 73 turns look familiar, but it’s not until you’re midway through each corner that you actually notice such things. Each new change of direction blindly leads you into another unfamiliar section, and despite several laps around the track, at the end of the day, I can only remember specific corners or an occasional short series of turns, and can’t for my life tell you in what order they arrive.

While my sweaty palms and increased heart rate would prefer dry weather – as would Subaru’s record-attempt car – I’m glad I got to experience all of this on a rainy day. The fact that I’m still alive, having raced through hundreds of wet ‘Ring corners is, in and of itself, a testament to the STI’s rallybred ability... and maybe my not-terrible, though obviously cautious driving. This is good old fashioned Subie stuff – wet and wild. It’s the ideal car for less-than-ideal situations.