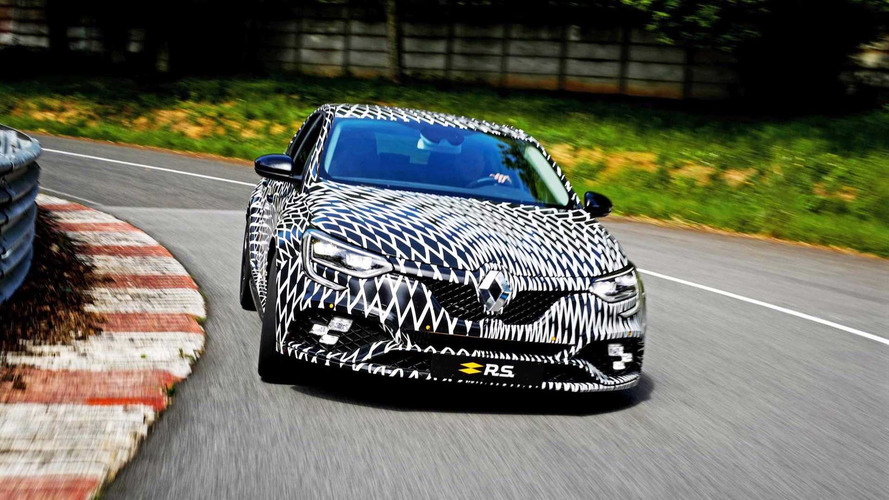 The official debut for the new hot hatchback will take place at the Frankfurt Motor Show in September.

Rumors of Renault bringing its hot new Megane R.S. to Monaco have now been confirmed. The revamped-for-2018 hot hatchback will make its first official public appearance during the upcoming Monaco Grand Prix weekend, taking to the course on May 26 for some laps at the hands of Renault Sport Racing Formula 1 driver Nico Hülkenberg. For the occasion, the Megane R.S. will pay homage to the manufacturer’s racing efforts by wearing a special yellow and black livery.

It’s not yet clear whether complete information about the new Megane will be released at the same time. Renault says the official unveiling for the next-generation Megane R.S. will take place in September at the Frankfurt Motor Show, so the Monaco event could well be just a show-and-go occasion. We’ve had plenty of camouflaged teasers with a fully exposed look at the Megane’s backside, showing its wide haunches with a redesigned rear fascia, diffuser, and center exhaust exit.

Rumors have suggested the Megane could go all-wheel drive to battle with the Ford Focus RS, but it’s widely believed that Renault will stick with front-wheel drive. That would place Honda’s Civic Type R in the Megane’s crosshairs as a target for the fastest front-wheel drive trophy, which the Civic currently holds.

“The Mégane R.S. embodies the passion of every man and woman working for Renault Sport,” said Renault Sport Cars Managing Director Patrice Ratti. “It is the ultimate expression of the savoir-faire we have accumulated through our countless successes in motorsport. Thanks to its extreme cornering efficiency, the Mégane R.S. is extraordinarily satisfying to drive at even the most challenging venues, such as the Nürburgring’s Nordschleife in Germany.”

It certainly sounds like Renault is ready to have a go at Honda’s Nurburgring record. To help achieve that, expect Renault to endow the new Megane with 300 horsepower, either from a new 2.0-liter boosted mill, or perhaps the turbocharged 1.8-liter engine from the Alpine A110.

• The Monaco F1 Grand Prix weekend will see New Mégane R.S. make its first public appearance around the Principality’s famous street track on May 26 in the hands of Nico Hülkenberg.
• Mégane R.S. will sport a yellow and black livery to mark Renault Sport’s colours.
• New Mégane R.S. will be unveiled at next September’s Frankfurt Motor Show.

Les Ulis, May 22 – Since 2004, the successive generations of Mégane R.S. have provided their owners with landmark innovations and technologies, from independent steering axis front suspension and a choice of Sport and Cup chassis, to Recaro bucket seats, Brembo brake callipers and R.S. Monitor, etc. Renault Sport’s staff are continually exploring new frontiers when it comes to providing customers with exceptional suspension and engine performance, along with aerodynamics honed for efficiency and the best of F1 technology. The successive generations of Mégane R.S. have all stood out as benchmarks in the compact sports car class.

Renault Sport’s road car range has long been driven by the experience Renault has forged in Formula 1 over the past four decades. The three generations of its flagship model – the Mégane R.S. – have featured a raft of advanced technologies for almost 15 years.

Due to be unveiled officially at next September’s Frankfurt Motor Show in Germany, New Mégane R.S. is poised to break cover in Monaco on Friday, May 26, in the hands of Nico Hülkenberg. For the occasion, the car will sport a yellow and black livery to mark the 40th anniversary of Renault’s involvement in Formula 1.