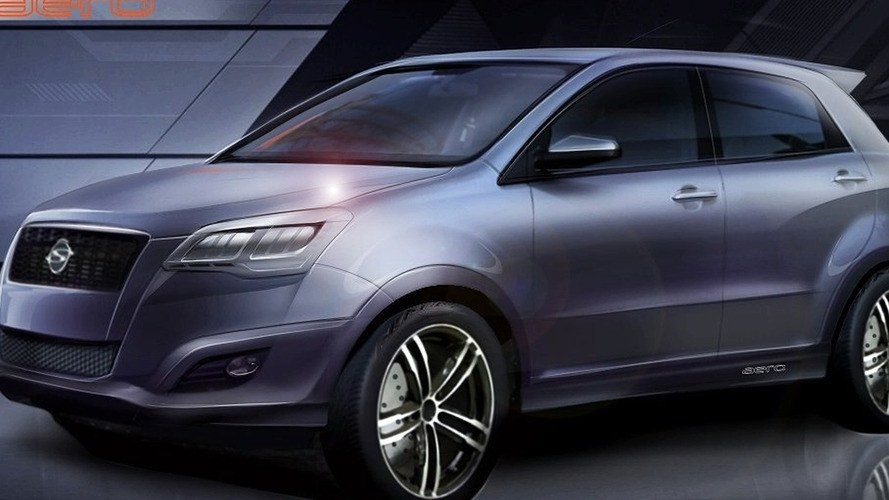 Ssangyong has released a detailed rendering of their new concept. The Ssangyong C200 Aero, a follow-up on the C200 Eco, will be on display in Seoul next month.

Korean automaker Ssangyong Motors has released the first image of their refined C200 Aero concept. The latest engineering and design study will get its full introduction at the International Seoul Motor Show in April.

Some of you may recall the previously seen C200 CUV concept shown in Paris last September with a 2.0 liter turbodiesel engine that produces 175 hp. That Crossover Utility Vehicle (CUV) concept has a monocoque body, front-wheel drive, and measures closely to the Toyota RAV4 in overall size. The vehicle was designed by Giugaro's ItalDesign firm.

The newly released rendering shows the C200 Aero version in a dark purple shade, with several body refinements, starting with the bumper. The front end now has a body colored bumper, better incorporated (and more realistic) fog lights, and bolder definition. The grille and air intake have been redesigned as well. New side sills flow well with the better-crafted side panels and the pointier side mirrors. We also like the new wheels, huge pre-drilled discs, and rear spoiler.

Hopefully, this rendering is a fair representation of what the vehicle will actually look like. The Ssangyong C200 Aero concept will be introduced next month in Seoul. It will appear side-by-side with the C200 Eco which was first released last week.