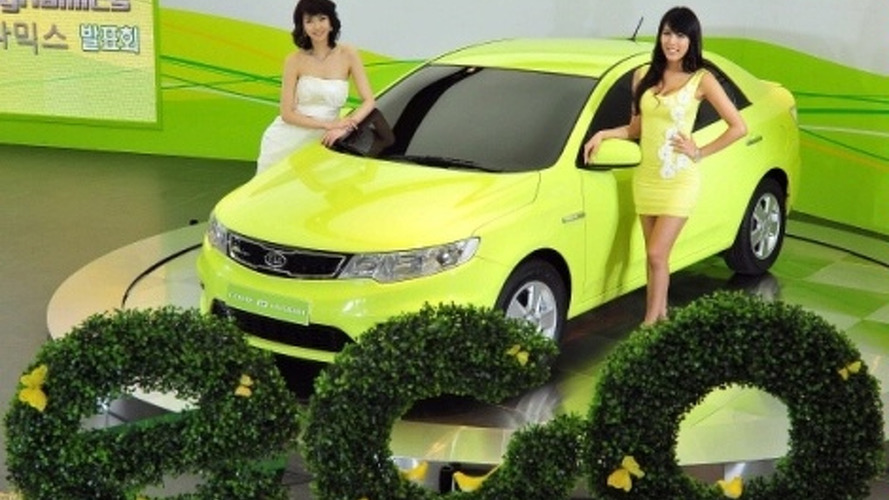 This is the new Kia Forte LPI, Kia's first mass-produced hybrid vehicle. The mild-hybrid gets a fresh look, compared to the non-hybrid Forte, and should be available in August.

Also announced were plans to bring their first full-hybrid to the market within the coming years. Possibly based on the Optima, the hybrid could hit the street by late 2010. A hydrogen fuel cell car could also become available by 2012.

The new car uses a 114 hp 1.6-liter liquified petroleum injected (LPI) engine in combination with a 20hp electric motor. These two units combine to give the car a 41 mpg rating (5.8 liters per 100 km). The motor runs off new lithium polymer batteries made by LG Chem. LG Chem is supplying similar units for the Hyujndai Sonata and Elantra hybrids, and they are also making battery packs for the Chevy Volt.

Stylistically, the Forte LPI has some different design elements when compared to its non-hybrid siblings. Larger air intakes and odd-shaped fog lights are built into the front bumper. The grille also takes on a new design, possibly to become a common thread amongst the Eco-Dynamics line. A new rear bumper is present on the hybrid, while rear lights, now with LEDs, look a little "unusual."

The new Kia Forte LPI goes on sale later this year in Korea, with possible expansion to China. No plans yet to bring the car to Europe or Stateside.