Brady will also work with the automaker to curate the selections for his ultimate Vanquish S.

Aston Martin is teaming up with NFL superstar Tom Brady in a rather bizarre partnership. The New England Patriots’ quarterback will work with the British brand on a “content series” called Category of One that will premiere later in the year. 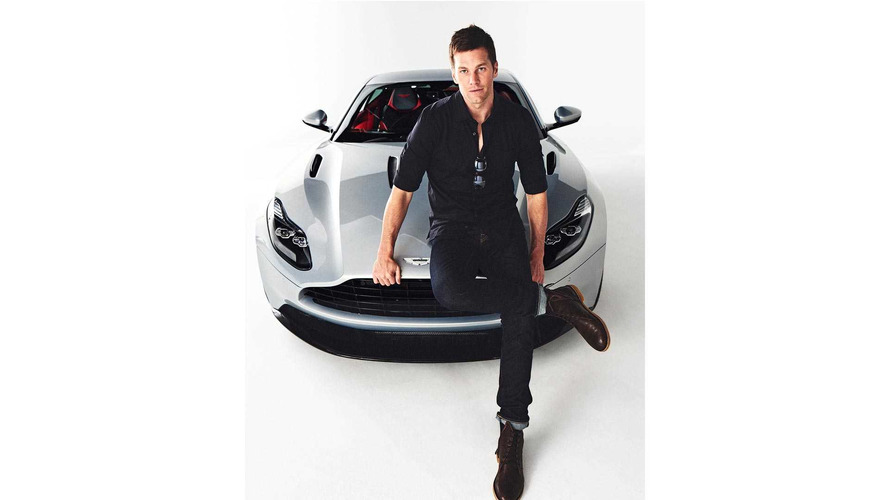 According to the firm, Brady will work with Aston Martin Chief Creative Officer Marek Reichman on a series that “will explore their affinity for The Love of Beautiful.” The general theme of the content will be portraying what Brady sees as beautiful in life, including in sports.

Brady will also create his dream version of the 2018 Aston Martin Vanquish S, and the company will document his choices as part of this series. The automaker will then unveil Brady’s ideal model this summer.

Aston Martin is currently in the early stages of what could be a brand renaissance. The new DB11 is just the beginning of a product onslaught that aims to add a new vehicle to the lineup every year through 2022. Spy shots already show the company working on a droptop version of the grand tourer, and the Vantage replacement is also under development.

The company’s next big step will be opening a new factory in Wales that will initially build the DBX, Aston Martin’s first crossover. Later, the site will also build new products for the Lagonda range of ultra-luxury models.

In around 2020, the Aston Martin will also reportedly add a V12-powered mid-engine supercar to its lineup. Details about the vehicle remain sketchy, but it might take some cues from the upcoming Valkyrie hypercar, which is limited to just 175 units.

Aston Martin and Tom Brady Unite Introducing ‘Category of One: Why Beautiful Matters’

·       Brady will collaborate with the British luxury brand on a new content series entitled Category of One, to premiere later this year

18 May 2017 - Aston Martin today announces the start of a new long-term partnership with Tom Brady, record-breaking National Football League star and one of the most renowned and respected athletes of all time.

In collaboration with Aston Martin’s VP & Chief Creative Officer, Marek Reichman, the designer currently responsible for creative direction of the Aston Martin brand and model range, Brady and Reichman will explore their affinity for The Love of Beautiful via a new content series entitled Category of One, premiering later this year.

“Tom is an inspirational leader and athlete with a meticulous approach to detail in his pursuit of success that aligns with our view of Aston Martin,” said Reichman. “His performances on the football field – not just recently but throughout his career – are an inspiration for us all. My team and I are looking forward to this creative collaboration as we continue to roll out Aston Martin’s ‘Second Century’ plan.”

Brady will seek to share visualizations of where he sees beauty in his sporting moments, what he sees as beautiful in life, and what continues to compel him to pursue greatness after five Super Bowl wins and four MVP Awards.

Tom Brady said: “Aston Martin exemplifies dedication to the craft of car making through a meticulous attention to detail and sustained peak performance. While 104 years of heritage are reflected in each hand-built car, with product from the DB11 to the Aston Martin Valkyrie, this brand is primed to excel for the next 100 years as well.

“As a long-time fan and driver I am honored to join the Aston Martin team at this special moment in the company's history."

The new partnership will also see Brady will curate his own take on a modern day Aston Martin, based on the 2018 Aston Martin Vanquish S. The process will be documented, with portions being revealed over time, and the Tom Brady-curated Vanquish S will be unveiled this summer.

New England Patriot Tom Brady is the first quarterback in NFL history to win five Super Bowl championships and the only player to have won them all playing for a single team. In January 2017, Brady led the Patriots to a dramatic and record-breaking Super Bowl LI victory, defying a setback and amazing viewers around the world.

Tom Brady drives the new 2017 Aston Martin DB11, a car that’s both stunningly powerful and beautiful. Hand built in Gaydon, U.K., the DB11 represents the most powerful “DB” production model within the brand’s history. Its 600bhp, V12-powered engine propels the DB11 from 0-60mph in less than four seconds. The body’s finely chiseled exterior form is striking and functional, as air is channeled throughout the vehicle to ensure it remains cool and stable under all conditions. Inside, the cockpit is a welcome mix of tradition and technology; the latest infotainment system rests among an interior where hand-stitched leather, wood and carbon fiber have been painstakingly handcrafted.