These 5 VW Concepts Will Make Enthusiasts Shout 'Take My Money' 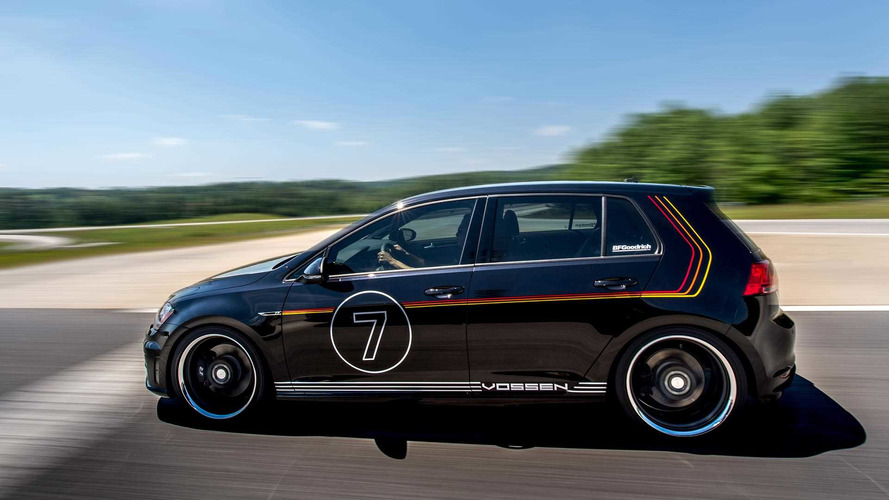 This quintet of intriguing vehicles will debut at SOWO: The European Experience on Hutchinson Island in Savannah, Georgia.

Volkswagen has a very nice surprise for its ardent fans in the United States because the German brand has have new concepts with enthusiasts specifically in mind. They’re based on the Alltrack, Beetle, GTI, Golf R, and Jetta GLI, and each one is sure to find fans that hope VW puts something like them into production.

The Golf GTI RS Concept is the member of the group that should get the most love from traditional performance enthusiasts. It features an aesthetic that borrows cues from the Porsche 911 GT3 RS, especially the script running down the side of this hot hatch. A widebody kit from Rocket Bunny bestows this machine with some seriously broad rear fenders. A big rear diffuser adds to the menacing look. Inside, the front seats are now leather-trimmed racing buckets. The rear bench is gone, and a roll cage takes its place.

The Golf R Heritage Concept offers an alternative take on the usual hot hatch. The black VW features a red, orange, and yellow stripe that references the German flag. Vossen wheels have a matte gunmetal finish with polished outer rims. A set of lowering springs completes the look.

While the GTI RS and Golf R Heritage concepts look aggressive, their appearance might be too ostentatious for some driver’s taste. For them, the Jetta GLI Nardo Concept might be a better choice. This one has a body in Audi’s Nardo Grey paint, and the HRE wheels feature a dark Tarmac finish. A set of H&R coil overs lowers the ride height.

The Golf Alltrack Country Concept has a completely different enthusiast in mind. This high-riding wagon is ready for camping, including a 2-inch suspension lift for getting around off road and extra fog lights. There’s no need to worry about finding a spot to pitch a tent because there’s one mounted on the roof, and it has a amenities like a solar panel and solar-heated shower. An entertainment system is hidden in the cargo area for watching movies by the fire. When the time for an adventure comes, two Trek Stache 9.6 mountain bikes are mounted on the back of the wagon.

Biking enthusiasts might also enjoy the Beetle Post Concept. BMX rider Alise Post mounts a pair of custom GW cycles to the back. For style, the vehicle has 19-inch Mr. Drama Queen wheels, and H&R coil overs lower the ride height. The vintage Volkswagen lettering on the sides is an especially neat detail.

The five concept will debut at SOWO: The European Experience on Hutchinson Island in Savannah, Georgia, and they’ll be on display together from May 19 through 21.

From Beetle to Golf Alltrack, Volkswagen of America’s concept carfleet is inspired by the diverse
interests of the brand’s enthusiasts

Herndon, VA —With the summer enthusiast season just around the corner,Volkswagen of America, Inc. will
unveil its enthusiast show fleet for 2017 at SOWO: The European Experience on Hutchinson Island, Savannah,
Georgia, between May 19 and 21. Featuring five models from the brand lineup, these specially-prepared show
vehicles are inspired by the diverse interests of Volkswagen enthusiasts.

This concept highlights the top Beetle R-Line trim and championship-winning BMX rider, Alise Post, who has
outfitted the car with two custom GW bikes for the project. The car rides on 19-inch Mr. Drama Queen wheels
from an up-and-coming company, Radi8, and uses an H&R Springs Street Performance Coil Over system that
lowers the stance and highlights the performance potential of theBeetle. Habanero Orange paint and the
vintage lettering on the doors give an added retro vibe to this Beetle.

The GLI has been a staple of the Volkswagen brand since the Mark2 generation of the Jetta. It’s something of a
stealth performance car and the Nardo Concept builds on that, adding a few simple touches to make the car
shine. The car is wrapped in Nardo Grey, a popular color at sister brand Audi, which brings out the lines without
looking flashy. Over the course of the Show season, the car will feature different sets of HREwheels, beginning
with the FF01 Flow Form series, finished in Tarmac. The Nardo has an H&R Springs Street Performance Coil
Over system and BFGoodrich® G-FORCE™ COMP-2 A/S™ tires for a more road hugging appearance.

Sam Dobbins, Creative Director at Vossen Wheels, is a great force within the enthusiast scene and a longtime
Volkswagen owner. His Golf GTI RS Concept is a fascinating amalgamation of different car cultures with a
particularly heavy Japanese influence via the Rocket Bunny widebody kit. To set his car apart from many others
with similar body modifications, Dobbins put a lot of effort into making sure that the sheetmetal was honed to
eliminate wheel rub, making the car comfortable to drive on a daily basis. The interior is stripped down, but the
polished aluminum floorpan, race-inspired seats, and other accents reflect the exterior design. The GTI RS
Concept rolls on Vossen wheels and features a Thule carrier box with custom, low-profile roof crossbars.

The Golf R Heritage concept features an homage to the car’s German heritage with a striking stripe package in
the colors of the German flag and a white, lower rocker accent stripe pattern. Vossen has provided the wheels,
starting with the VWS-1 finished in matte gunmetal and polished anodized silver. The wheels are shod with GFORCE COMP-2 A/2 tires from BFGoodrich and the car has been lowered on a sport spring package from H&R
Springs. The simple touches highlight the already great platform of the Golf R model, while leaving the car close
to factory specification—which is what most R owners tend to do.

Additional foglights are integrated into the lower bumper and a hitch-mounted Thule T2 Pro XT bike rack carries
two Trek Stache 9.6 mountain bikes. Off-pavement adventure continues with a roof-mounted tent system,
topped with flexible solar panel, a curved LED light bar, and a solar-heated shower. In the trunk, an integrated
entertainment system complete with media computer is mounted into the spare wheel well, and a custom LED
light bar is integrated into the liftgate for additional visibility. Three batteries hidden under the trunk floor are
charged via the solar power system to keep the media center and USB power ports at full charge. A custom
topography graphic wrap finishes the Golf Alltrack Country Concept.With its well-crafted customizations, this
vehicle is ready to keep up with the demands of even the most daring weekend adventurer.

About Volkswagen of America, Inc.