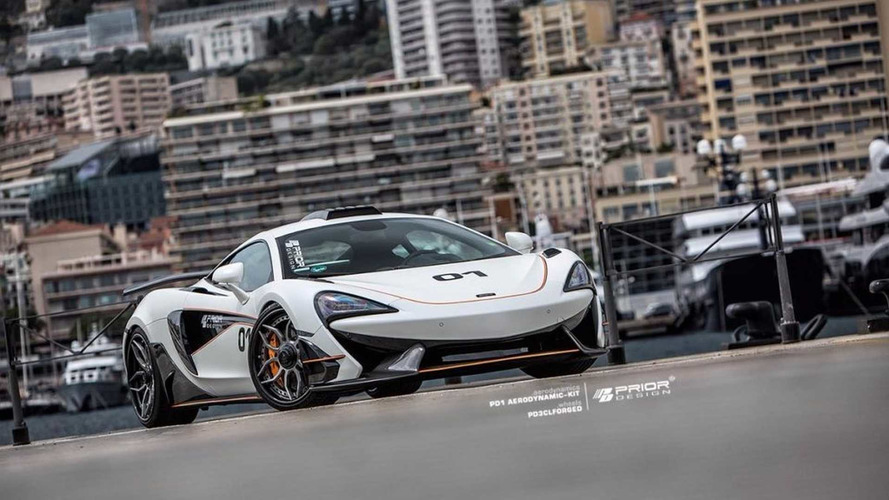 An upgraded exhaust makes it sound angry, too.

Prior Design now offers the aggressive Aero PD1 body kit for the McLaren 570S for owners of the supercar looking to makes its appearance a little meaner.

The parts appear to take some inspiration from McLaren’s own 570S Sprint track car. For example, both models feature extended front splitters with orange accents at the tip. Prior Designs’ styling puts a complex cutout in each corner, too. Revised fenders feature new vents. The most striking change is the roof-mounted air scoop that appears to be there more for aesthetic than for improving performance. There are also bigger side sills with a vertical fin just behind the front wheels.

At the back, a fixed wing is attached to the rear deck. New fenders add outlets just behind the wheels. An updated diffuser looks like an exaggerated version of the stock unit by incorporating more vertical vanes into the design.

Prior Design also installs massive wheels, and their spokes look a little like an engineer’s calipers. A new exhaust makes a nice sound, too. You can listen to it in the video below.

Customers wanting an open-air experience in the 570S just need to wait a few months for McLaren to unveil the convertible version. Rumors indicate that it would use a folding hardtop, but the company’s engineers would make sure the necessary modifications would add as little weight as possible. Performance shouldn’t change much over the existing hardtop. The entry-level 540C wouldn’t be available as a droptop.