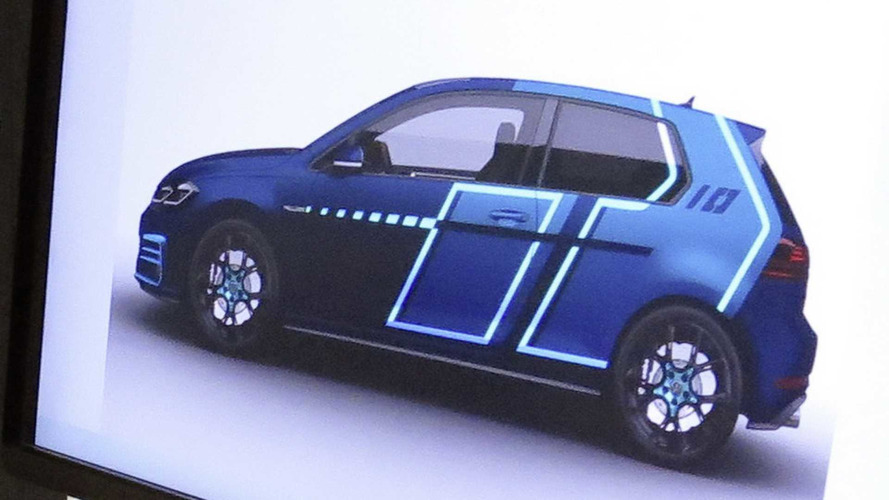 VW’s skilled apprentices have come up with the tenth Golf GTI for the annual Wörthersee GTI meet and for this year they have chosen a three-door version to give it a makeover. Five women and eight men aged between 18 and 23 specialized in several areas joined forces to create this one-off Grand Touring Injection using CAD and 3D printing technology. The striking wrap with multiple shades of blue came to life on a graphics tablet and we can see even the spokes of the alloy wheels have been color-coordinated with the hatch’s body.

Although the attached teaser images are not showing the interior, VW says the standard audio has been removed to make room for an upgraded setup boasting 11 loudspeakers and an unspecified number of subwoofers for a total output standing at 1,960 watts.

There’s no word just yet about whether there are any power upgrades or other hardware tweaks, but it looks like this year’s tricked-out Golf GTI is more about putting on a show. One would say previous builds have turned out to be more exciting, such as last year’s 400-hp GTI Heartbeat (pictured below).

The Wolfsburg Edition introduced in 2014 with 380 horsepower on tap was also more exciting, unless this new version is hiding something truly amazing. Going back in time, the 2013 Wörthersee GTI meet saw the introduction of the Golf GTI Cabrio Austria, while before it were the 2012 Black Dynamic and the 2011 Reifnitz.

As for the new one, the unique three-door Golf GTI will be revealed by VW’s apprentices next Wednesday during the 36th GTI meeting. Chances are other members of the group such as Audi, Skoda and/or SEAT will also have something special to introduce at the event. These are all strictly showcars, so production versions are unlikely to be on the agenda.

Wolfsburg/Maria Wörth – The Volkswagen plant in Wolfsburg, Vocational Training, Hall 103. Screened off by partitions, Volkswagen and Sitech apprentices are completing their work on a unique vehicle: the Wörthersee GTI 2017. The 13 apprentices in six vocations have designed, developed and built the show car in accordance with their ideas using digital technologies. In a few days, they will be presenting it at the 36th GTI meeting, which is to be held at Maria Wörth on Wörthersee from May 24 to 27.

This year the targets are especially high as this is the 10th Wörthersee GTI built since 2008, when apprentices from Wolfsburg first appeared with their own GTI creation at the Wörthersee meeting. The Wörthersee GTI 2017 crowns the first decade of show projects by Vocational Training in Wolfsburg. The debut of the anniversary car is to take place on Wednesday, May 24, on the lake stage of Maria Wörth before an audience of many thousands of GTI fans from across the globe.

Now every day counts and everything must be right first time. The apprentices’ GTI is surrounded by decorative trims, door and side mouldings and front seats, all ready for installation. “Our apprentices are  benefiting from their earlier decision to forge ahead with the design of their Wörthersee GTI using digital technologies,” says project manager Holger Schülke.

“This way, we were able to take fast and efficient decisions concerning the design of wheel rims, paintwork and foils,” explains Eric Miguel Lehrach (21), apprentice motor vehicle mechatronics technician, who is the team spokesperson. “In addition, we kept the design and production process for the special components needed for the sound system and rear-end equipment in our own hands.”

Graphic design for wheel rims, paintwork and foils
Yasmine Weinhold (20), apprentice media designer, was responsible for the visualization of the exterior. At her workplace in the MultiMediaCentrum she produced several design series on a graphics tablet. Weinhold’s data were put to a variety of uses by the team during the course of the project. Finally, they were even used as an aid to positioning during car wrapping, the application of contrasting foils and decorative strips to the car.

System and high-voltage technicians configure the sound system
Janik Kelm (20) and Götz Riechmann (19), future motor vehicle mechatronics technicians for system and high-voltage technology, used a variety of components to configure a high-tech sound system with Internet connection and crystal-clear sound from 11 loudspeakers and subwoofers with a total rated output of 1,960 Watts.

CAD and 3D printing technology for rear-end equipment
Laura Hein and Alexander von Czacharowski, budding process technicians specializing in plastic and rubber engineering, and Nils Lennart Fröhlich (all 21), future technical product designer, designed side and loudspeaker trims, produced them using 3-D printing and fitted them precisely in the vehicle. On the CAD screen, Fröhlich designed a total of eight individual components using Catia design software. These included all mounts, clips and cable ducts. With his design data, the young man from Brunswick controlled a 3-D printer at the plastics production competence center which printed the individual components layer by layer. The trims were then coated with special grained foils and adapted to the interior of the GTI in terms of appearance and haptics.

Sarah Isabel Schorle is training with Sitech in Wolfsburg, Laura Hein with Volkswagen at the Brunswick plant, and all the others at the Volkswagen plant in Wolfsburg. Sitech is the Volkswagen Group company specializing in the development and production of vehicle seats.