Is This Corvette SUV Rendering Sacrilegious Or Sensational? 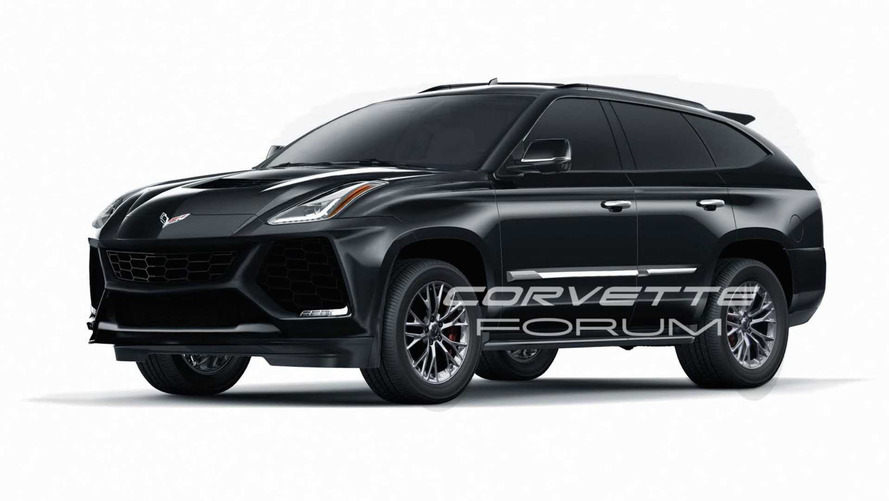 We don't know what to make of this concept.

What would a Chevy Corvette SUV look like? That’s probably not a question enthusiasts have ever asked of their favorite sports car. Still, a few creative minds came together to dream up a sporty SUV that bears the same name, and it’s definitely… unique.

The renders come to us courtesy of our friends at Corvette Forum, and show a high-riding SUV with some signature Corvette styling. The headlights and taillights, for example, are the same shape you'll find on the current Corvette, while the front fascia borrows a few familiar cues, including the angular nose. Even the wheels have been ripped directly from the current Z06.

The body is painted in black, and a few detailing accents like chrome on the door panels and mirrors can be found throughout. Even daytime running LEDs have been embedded into the grille. Though the artist doesn’t give any details as to idealized performance, the website does say that a potential Corvette SUV would "leverage the power and performance of the folks at Bowling Green," potentially rivaling the new Grand Cherokee TrackHawk. That means a hefty V8 would likely be under the hood.

For now, Chevy doesn’t have any plans to bring a Corvette SUV to market (thankfully). Instead the company will continue to work on its most potent Corvette model to date – the upcoming ZR1 (pictured below). Spy photos and plenty of details have been leaked surrounding the new sports car, including the fact that it will have near 700 horsepower (521 kilowatts) courtesy of a rebooted 6.2-liter supercharged V8.

The new ZR1 is expected to make its debut in April. The Corvette SUV, meanwhile, will remain a digital fantasy.