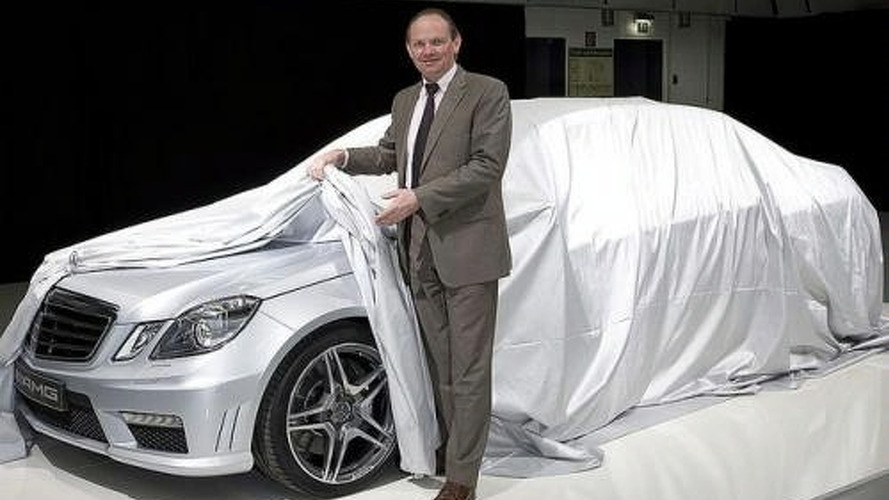 Here's a teaser for the upcoming E63 AMG sedan, which will be unveiled next month at the New York auto show.

That's an un-identified man, likely a Mercedes-Benz executive, getting cute with the camera and showing us the face of the car. Luckily, we have spy photographers that can get us a better look, and we've already seen several sets of shots of this E63 AMG sedan.

Mercedes has been rather patient-less recently with the launch of AMG models, with AMG variants coming on the heels of new launches without the marketing folks taking too much time in-between to build anticipation. Perhaps they have their reasons for the strategy. But it's, no doubt, good news for those waiting on an AMG E-Class like this one.

Details on the new E63 are still few. There's a 6.3 liter V8 under the hood, with 525 hp and 630 Nm of twisting power churning at the 7-speed automatic transmission, already seen in the SL 63 AMG. Those power ratings are evidence that AMG does, indeed, believe that the horsepower wars are over, as it declared a few months ago, since competitors like the RS6 (579 hp) feature more thunderous numbers.

But it may be just that, a horsepower number that AMG can match with weight reduction and better aerodynamics, which it has promised to do. We'll have to see the E63 take a few laps around the track to see how much progress AMG has made with the model, but the performance division has already shown it has the technology to make up for less power upratings.