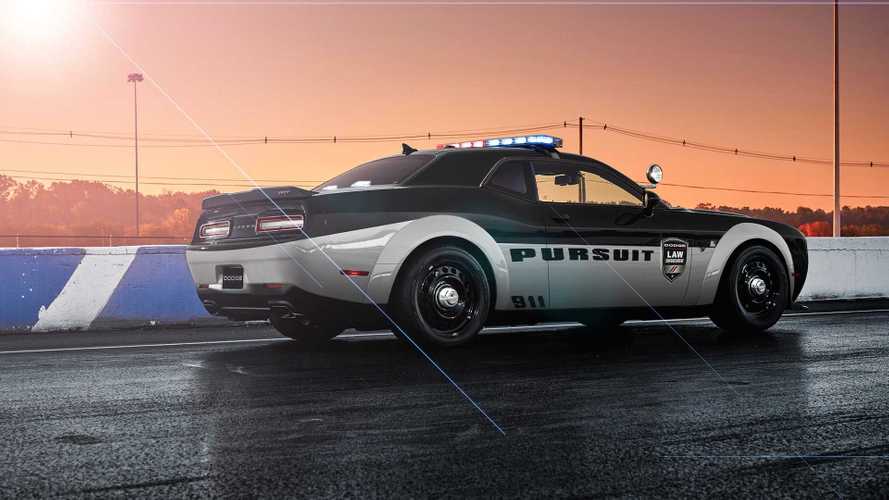 This might be the only time you’d ever see a Dodge Demon in your rearview mirror.

The Dodge Challenger Demon is a muscle car that’s scary enough on its own. So scary, in fact, that one publication has called for it to be banned from use on public roads. But now drivers have an entirely new reason to be worried about Dodge’s most potent vehicle... at least in the virtual world.

Rendering artist Aksyonov Nikita has digitally imagined a Dodge Challenger Demon police car, and speeders everywhere should be terrified. Unless you’re in some ridiculous supercar (or a Tesla), you won’t be beating this police cruiser to 60 miles per hour (96 kilometers per hour) anytime soon. Stock, the Dodge Demon will sprint to 60 in just 2.3 seconds, which would make it the fastest police car ever – even quicker than the GT-R Pursuit we saw at the New York Auto Show.

Like other Dodge police products before it, it wears a pretty typical "Pursuit" livery. The white and black exterior is accented by a roof-mounted light bar, two spotlights on either side, black steely wheels, and a ram bar on the grille. Red and blue lights are also embedded into the front grille and rear window.

The only thing that doesn’t change is the engine, not that it needs to. Under the hood is the same 6.2-liter supercharged V8 producing 840 horsepower (626 kilowatts) – on 100 octane fuel – and 770 pound-feet (1,043 Newton-meters) of torque. It’s the most powerful production V8 in the world, and apart from its impressive 0-to-60 time, it will also conquer the quarter mile in just 9.65 seconds. The Dodge Demon really is a beast of a muscle car… just not one you’d like to see in your rearview mirror anytime soon.