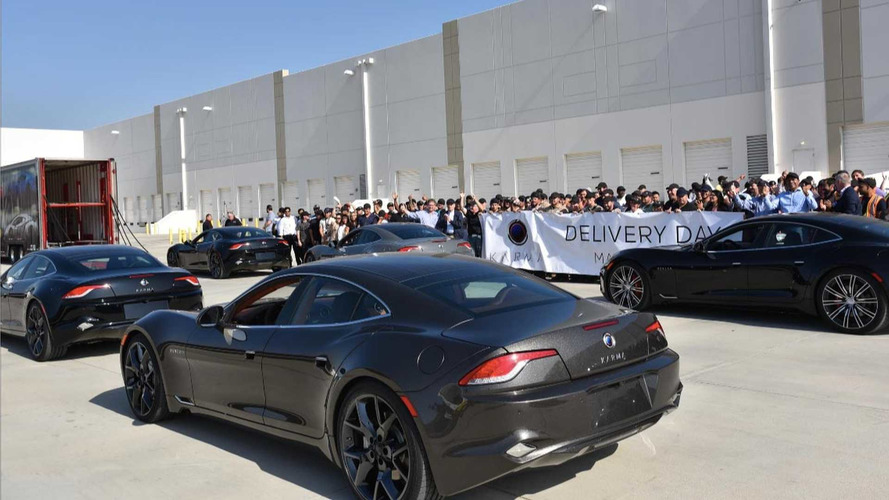 The Karma Revero is finally arriving in dealerships. The company teased the approach of this milestone day earlier this month, and we found out that the revised plug-in hybrid will top out at $139,900. On Friday, Karma Automotive officially loaded the first of its PHEVs onto delivery trucks and sent them on their way to Karma retailer showrooms. The cars will be in dealerships later this week, although some have already been appearing in the wild, as seen on Twitter.

The new Karma is real! And it looks even better than the original. @KarmaAutomotive pic.twitter.com/yh1xADRafQ

Currently, there are 13 Karma service centers (10 of which are also sales locations, as you can see here) in the U.S. and Canada, with the closest one to Karma's Moreno Valley production facility being the sales and service center in Pasadena. The three service-only centers are in San Francisco, CA, Irvine, CA, and Vancouver, BC.

Karma's Chief revenue Office Jim Taylor said in a prepared statement that, "Karma has moved from a product development company to an automotive manufacturer. We have completed the critical steps to become a true luxury vehicle OEM. The launch is a great accomplishment for our Company and all our team members."

Karma started production of its Revero PHEV prototypes at its Southern California facility last summer. The factory has a maximum annual production capacity of 3,000 units, but there's no word on when it will reach that threshold. As for when the Atlantic concept might finally see the light of day or when the company will start building vehicles in its $375-million factory in China, we'll just have to wait. The Chinese plant, when it comes online, will be able to make 50,000 PHEVs a year, is the plan. Karma Automotive also plans to run its own "brand experience centers" as a way to sell vehicles.

Vehicles Arriving in Showrooms This Week

"Karma has moved from a product development company to an automotive manufacturer," said Jim Taylor, Chief Revenue Officer.  "We have completed the critical steps to become a true luxury vehicle OEM. The launch is a great accomplishment for our Company and all our team members."

Consumers interested in experiencing the Revero can visit karmaautomotive.com or one of ten retailers in the United States and Canada.