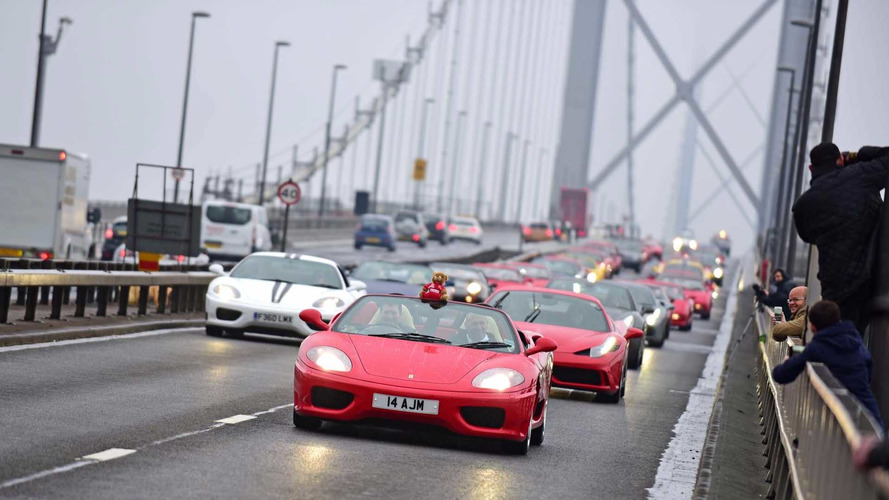 When your car club is old enough to celebrate a 50th anniversary, there are a certain number of privileges to be awarded. When your club is devoted to Ferrari, a few more perks are virtually guaranteed. And when Ferrari is celebrating its 70th anniversary at the same time, well, people close entire bridges for special parades. We’re not just talking any bridge, either – the Forth Road Bridge in Scotland connects Fife and Edinburgh and stretches nearly two miles in total length.

It’s plenty long enough for 75 Ferraris to cross side-by-side, which is exactly what the Ferrari Owners’ Club of Great Britain (FOC GB) did this past Saturday, en route to a club track day held at Knockhill Circuit in Fife. Officials closed the northbound side of the bridge for approximately 10 minutes as the parade of prancing horses trudged through rain and fog, much to the delight of the wet onlookers who lined the bridge for photos and video. The local Ferrari dealer added to the supercar count, which included such machines as a LaFerrari, F12tdf, and vintage rides such as a 330 GT and 308 GTB.

With 2017 being a banner anniversary year for both the FOC GB and Ferrari proper, similar events are already planned as part of Ferrari’s 70th Anniversary UK Tour. Technically, the parade and track day at Knockhill preceded the official tour, which officially begins in June and runs through September. As part of the celebration, Ferrari will be showcasing the limited-production LaFerrari Aperta at locations throughout the country, with the tour wrapping up at Silverstone Circuit for the Ferrari Racing Days towards the end of September.

We hope better weather greets the forthcoming events. 75 Ferraris in the wet over a picturesque suspension bridge is certainly pleasant for the eyes and ears, but with over 2,750 member in Great Britain’s official Ferrari club celebrating 50 years while Ferrari celebrates 70, there’s potential for some epic supercar parades in the months to come.

London, 13 May 2017 – The Ferrari Owners Club GB celebrated their 50th Anniversary in 2017 with a special parade of Ferrari cars across the Forth Road Bridge which was specially closed to mark the club’s half-century. As one of the oldest Ferrari Owners Clubs in the world, the FOC GB now has over 2,750 members and a packed calendar of social meetings, track activities and regional events which enable Ferrari owners to share their passion for the iconic brand.

The FOC GB’s special parade over the Forth Road Bridge included cars from Graypaul Edinburgh, the official Ferrari Dealer for Scotland, as well as several very exclusive models such as the Limited Series LaFerrari and F12tdf, and a number of historic models, such as the 330 GT, 246 Dino and 308 GTB. The Forth Road Bridge was closed from 08:00-08:11 to allow the parade to pass from Edinburgh to Fife, heading north for a FOC GB track day at Knockhill Circuit.

The event also pre-empts the official Ferrari 70th Anniversary UK Tour which takes place from June to September at various locations around the country. The LaFerrari Aperta will headline Ferrari’s presence at the Goodwood Festival of Speed from 29 June to 02 July, leading a parade of the most iconic road and racing Ferraris from the company’s past 70 years during each day of the event. Ferrari will also have a full display of the current product range at the event, including the new GTC4Lusso which makes its dynamic UK debut at the event.

The Ferrari 70th Anniversary UK Tour then continues with the LaFerrari Aperta visiting every official Ferrari Dealer in the UK during July and August, and on public display on the following dates (exact location in each city to be announced):

Ferrari’s Corse Clienti division will also be running a number of sessions for F1 Clienti and XX Programme cars, including a number of important race-winning F1 cars from several different decades of Ferrari’s racing past. For more information, or to purchase tickets, visit: http://www.silverstone.co.uk/events/ferrari-racing-days/.