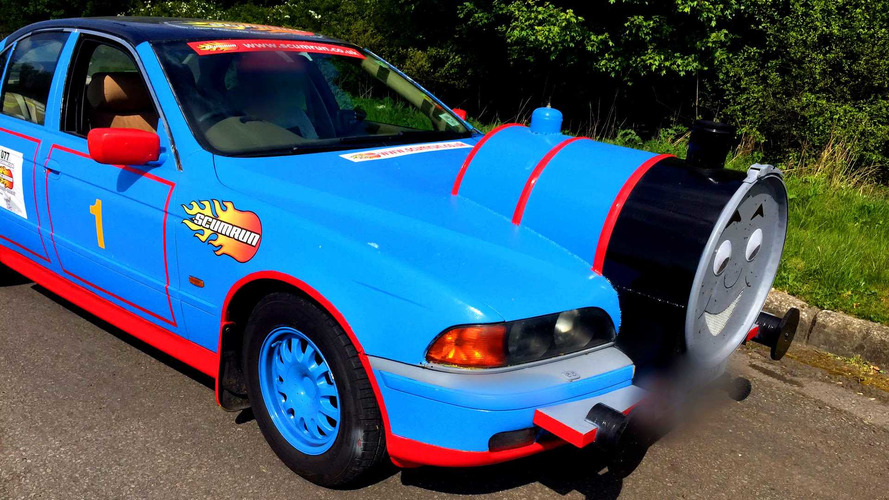 It looks so happy to be on the street. Too bad British cops don't feel the same way.

Thomas the Tank Engine’s smiling face and blue body is familiar to children around the world because his long-running Thomas & Friends franchise. So imagine how happy a kid would be to see the beloved character driving down the road. The British cops aren't nearly as giddy about seeing this bizarre vehicle on the road, though.

This E39-generation BMW 5 Series features a blue paintj ob with red highlights and a yellow 1 on the side just like Thomas. However, the coolest and weirdest part is the smiling face sprouting from the hood. The extension appears to be a 55-gallon drum with modifications so that it can look like the front of a train. The bumper also has additions that match the classic locomotive.

Unfortunately for Thomas' many young fans, the cops didn’t see the modified sedan in such a cheery way. According to the Huddersfield Daily Examiner in the United Kingdom, the police stopped Thomas near Wetherby, England, and cited the owner for “‘construction and use offenses.” In British legalese this refers to vehicles having dangerous modifications or defects. In an accident, the massive changes at the nose and bumper could potentially be dangerous for other drivers or pedestrians. The tweaks are probably bad for the driver’s vision out of the windshield, too.

Rules in the United States can make it a little easier to drive a pop-culture-inspired modifies vehicle a little easier to drive without negative attention from law enforcement. For example, a guy in Tennessee used a 1965 Chevrolet van as the basis for recreating the Teenage Mutant Ninja Turtles Party Wagon. Not only did the finished product look amazing, but the builder even managed to incorporate the giant, swing-out door on the side.