Lada Vesta Wagon Spied With The Most Ineffective Camo Ever 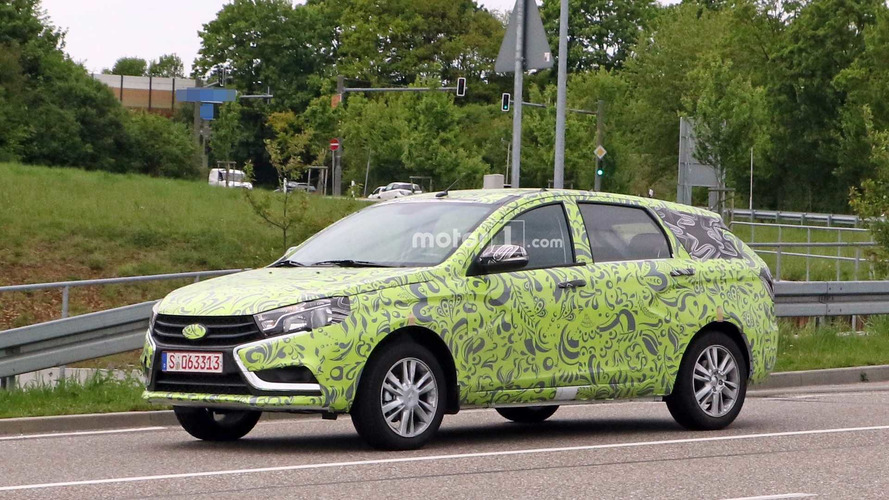 The role of camouflage is to keep something under the radar. In this case, it does the exact opposite.

Lada’s most recent styling language is not what you would call Red Dot Design award material, but even so the Vesta is a huge improvement when you compare it to older products from the Russian brand. Parent company AvtoVAZ has teamed up with the Renault-Nissan alliance to engineer the Vesta, which has been around as a sedan for close to two years and as you can see will soon get a more practical wagon body style.

The model was actually previewed back in August 2015 by the Vesta Cross concept (pictured below) introduced at the Moscow Off-Road Show as a crossover-influenced wagon with a jacked-up suspension and extra body cladding. Considering the prototype wearing a striking camouflage appears to have the full production body, the road-going version will likely debut in the coming months with a design similar to the sedan and the showcar.

It will go up against the likes of Dacia Logan MCV and is expected to carry over the same engines from its sedan counterpart. That means power will be provided by a naturally aspirated 1.6-liter gasoline unit developing 106 hp (78 kW) and 148 Nm (109 lb-ft) of torque and a slightly stronger 1.8-liter with 122 hp (78 kW) and 170 Nm (125 lb-ft). These will be linked to a Renault-sourced five-speed manual transmission or AvtoVAZ’s own five-speed automated-manual gearbox sending power exclusively to the front axle.

While Lada hasn’t said a word yet about the trunk’s capacity, it goes without saying it will significantly increase over the sedan’s 480 liters. Expect somewhere in the region of 550 liters or perhaps even more to match the Logan MCV’s massive 573-liter boot with the rear seats in place and up to 1,518 liters after folding them down.

As a refresher, the latest product to come from Lada is the 4x4 40th Anniversary Edition, which as the name implies marks four decades since the birth of the firm’s cheap off roader known up until the 2014 model year as the “Niva.”