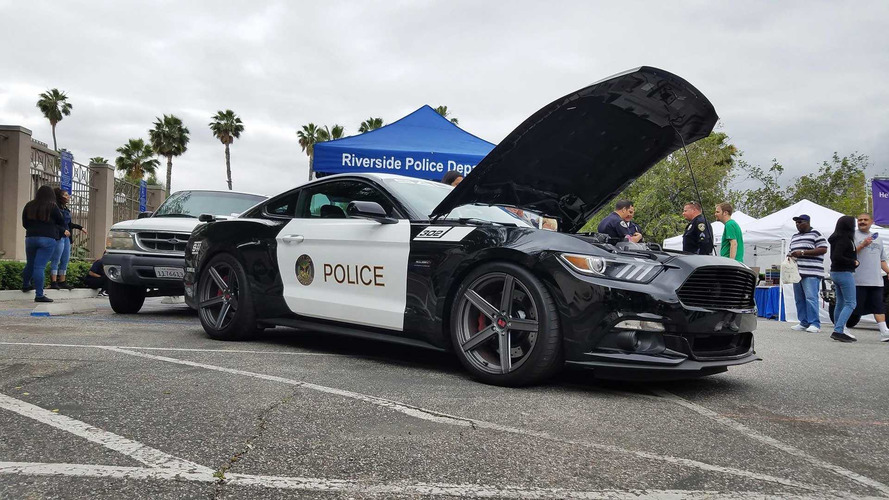 It likely won’t ever see regular patrol duty, but it’s still one of the coolest cop cars around.

Everybody knows about the crazy police cars found in places like Dubai. Unique one-off police vehicles are fairly common in the United States as well, and actually, if you step back 30 years you’ll learn many agencies utilized the talents of Ford’s Fox Body 5.0 Mustang in notchback form. They were neat enough for the day, but with the old pushrod V8 making 225 horsepower in a car saddled with a soggy automatic and heavy police gear, they weren’t exactly quick.

The new Saleen Mustang delivered to the Riverside Police Department in California doesn’t have that problem. That’s because its supercharged 5.0-liter V8 has over three times the horsepower – 730 to be exact – with 600 pound-feet of twist. It started life as a 2016 Mustang GT before going to long-time Mustang tuner Steve Saleen, where his company Saleen Automotive donated time to make the conversion from a standard 435-horsepower Mustang GT to the supercharged Saleen S302. Police-spec lights and sirens were donated by Federal Signal, with the install donated by West Coast Lights and Sirens.

The car was built for the Riverside Police Officer’s Association as a memorial vehicle, with considerable support from local businesses. As such, it's primary duty is to appear at shows, parades, and special events.

“The memorial car is intended to raise awareness of the risks faced everyday by the men and women who wear the police uniform, and those who have made the ultimate sacrifice,” said the Riverside Police Department through Facebook. “With awareness comes the financial assistance for those injured or killed in the line of duty.”

There’s no word on whether it’s also equipped with radar guns and provisions for weapons in the trunk. Still, the next time we’re in Riverside, we plan to be on good behavior.