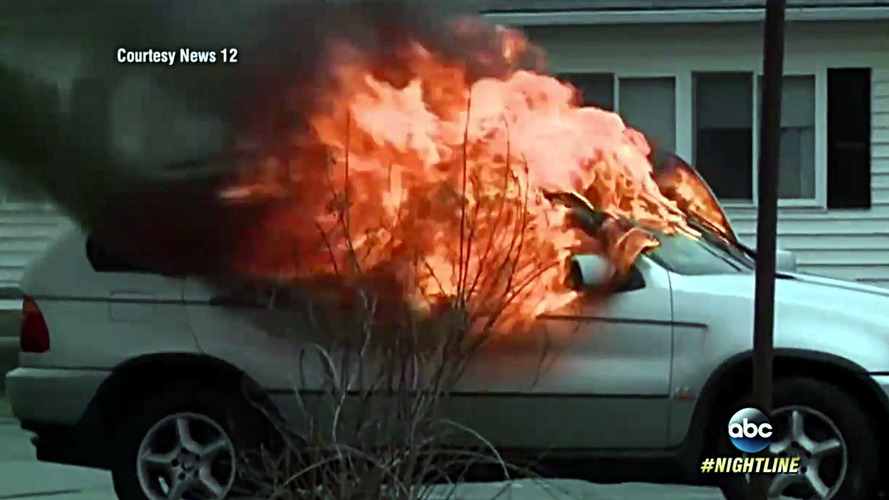 Reports of 42 fires among parked BMWs in the last five years would be a big deal, if there were evidence of a common thread among them.

A recent report by ABC News has brought to light an alleged problem that has caused 42 parked BMWs to catch fire over the last five years. These vehicles were not subject to any open, fire-related recalls, according to the story. However, the quality of the reporting makes it difficult to lend much credence to this purported danger.

According to this story, people are parking their BMWs, and sometime later the vehicle catches fire. The time until the blaze begins can be as little as a few minutes or as long as a several days later. So far, the blazes haven’t injured anyone, but they have caused significant property damage, including at least two house fires.

If BMWs have a safety defect causing these conflagrations that would be a huge story. However, ABC News’ report does the absolute minimum to find a cause for these fires. An industry expert explains that even when the ignition is off that many of a vehicle’s electronic systems remain active, which still makes a blaze possible. Although, this explains why a spontaneous conflagration could happen in any model, not just ones from BMW.

BMW North America spokesperson Thomas Plucinsky told Motor1 that the company has been in contact with ABC News for “about a month” about this story. In that time, ABC only gave the automaker access to 17 VINs for the 42 allegedly affected vehicles, including 6 of them the day before the story’s publication. At this point, there is “no common thread” linking these blazes, but BMW’s team is working continuously with the National Highway Traffic Safety Administration to investigate.

The report also does a poor job of differentiating between models. Neither the written report nor the televised version cite the specific make and model for all 42 BMW fires, but the products shown span well over a decade. A first-gen Mini Cooper S (produced from 2001 through 2006) shows up at 1:58 into the video, and a 2016 4 Series receives serious focus in the clip, too. A 2005 Z4, 2008 X5, and 2011 3 Series also garner specific mentions, and several more models with unspecified model years get airtime, including a 5 Series Gran Turismo and what appears to be an E46-generation 3 Series. Many of these vehicles have completely different powertrains and come from different factories, but ABC News makes no effort to point that out.

The report tries to establish a link between these fires and a spate of blazes in BMW models in South Korea. However, any connection seems tenuous at best. According The Korea Times, investigators there found evidence of a fuel leak as the cause, but the fault only affected 1,741 examples of 13 models with production dates from June 25 to September 3, 2014 – a span of just a few months rather than years for the affected vehicles in North America.

In a statement (embedded in full in the Press Release section below), BMW North America says:

“In cases that we have inspected and are able to determine root cause, we have not seen any pattern related to quality or component failure. Vehicle fires can result from a wide variety of external reasons and can range from improper accident damage repair, unauthorized aftermarket modifications (such as remote starters, stereo installations, etc.), previous vehicle flooding, rodent nesting, lack of, or improper preventative maintenance and even arson.”

Automotive fires are far less common today than in the past. Research since 1980 by the National Fire Protection Association shows a peak of 459,000 blazes in 1988. The situation has improved drastically since then, including 174,000 fires in 2015 (the most recent year with data).

Until BMW, ABC News, or a third party establish a concrete cause for these fires, there’s not much for Bimmer or Mini owners to worry about. With around 4.9 million vehicles from the automaker on American roads, 42 fires mean that the danger of a sudden conflagration is extremely low.

You can watch ABC News' report on the fires from the link, below.

Woodcliff Lake, NJ – May 11, 2017… We at BMW empathize with anyone who has experienced a vehicle fire. We understand it is a traumatic event and the safety of our customers is of utmost importance to us.

BMW has a long reputation for engineering excellence and is known as a pioneer in safety technology. We have full confidence in our products and strive to always provide the best possible owner’s experience.

We have investigated and in some cases inspected the vehicles identified by ABC News. These vehicles span an age range of 1-15 years, accumulated mileage of up to 232,250 miles and multiple generations and model types. In cases that we have inspected and are able to determine root cause, we have not seen any pattern related to quality or component failure. Vehicle fires can result from a wide variety of external reasons and can range from improper accident damage repair, unauthorized aftermarket modifications (such as remote starters, stereo installations, etc.), previous vehicle flooding, rodent nesting, lack of, or improper preventative maintenance and even arson.

Our Customer Relations team will be happy to assist customers with any additional questions or concerns about their BMW and can be reached at customerrelations@bmwusa.com or at 800-831-1117.

BMW of North America cannot normally comment on incidents outside of the US. However, we can say that as in the US, the incidents in Korea have been investigated and it was determined that the majority were caused by unauthorized aftermarket modifications.

BMW of North America, LLC has been present in the United States since 1975.  Rolls-Royce Motor Cars NA, LLC began distributing vehicles in 2003.  The BMW Group in the United States has grown to include marketing, sales, and financial service organizations for the BMW brand of motor vehicles, including motorcycles, the MINI brand, and the Rolls-Royce brand of Motor Cars; Designworks, a strategic design consultancy based in California; a technology office in Silicon Valley and various other operations throughout the country.  BMW Manufacturing Co., LLC in South Carolina is part of BMW Group’s global manufacturing network and is the exclusive manufacturing plant for all X5 and X3 Sports Activity Vehicles and X6 and X4 Sports Activity Coupes.  The BMW Group sales organization is represented in the U.S. through networks of 341 BMW passenger car and BMW Sports Activity Vehicle centers, 153 BMW motorcycle retailers, 126 MINI passenger car dealers, and 36 Rolls-Royce Motor Car dealers.  BMW (US) Holding Corp., the BMW Group’s sales headquarters for North America, is located in Woodcliff Lake, New Jersey.