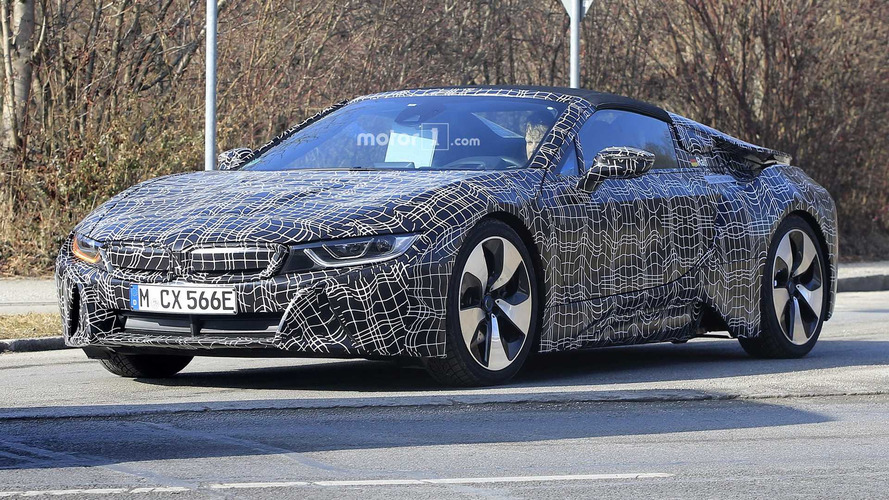 BMW has confirmed multiple times the plug-in hybrid roadster will be launched next year.

The i8 Concept Spyder came out a little over five years ago, but it won’t be until early 2018 or so when the production version will finally make its debut roughly four years after the coupe’s production start. Seen here are not one, but two prototypes of the plug-in hybrid sports car giving us the opportunity to check out the electrified droptop with the roof up and down.

BMW was very generous with the camouflage applied on these two prototypes, but even so we can observe the Spyder will unsurprisingly take after its fixed roof counterpart. Speaking of the roof, it appears we’re looking at a simple canvas top, although things could change for the road-going model. We won’t be too surprised if the i8 Spyder will be available with a hardtop, presumably making use of carbon fiber like many of its other bits and bobs.

The switch to a detachable roof panel will bring other changes to the body as the rear end will feature two humps redesigned compared to those of the aforementioned concept and the more recent i8 Vision Future Interaction concept illustrated above. Some other minor changes could also be in tow, but the psychedelic wrap of camo is doing its job at blocking the view.

Even more modifications could occur underneath the avant-garde skin as the i8 Spyder will supposedly be based on the facelifted version of the coupe set to bring additional power, with some reports indicating it could have about 372 hp (277 kW). A bigger battery pack could also find its way to boost overall range and make the i8 a better companion on longer journeys by taking fewer stops to the gas station.

See more spy shots of the BMW i8 Spyder:

Although BMW has made it clear the i8 Spyder will go on sale in 2018, we might actually see the car in is full production glory before the year’s end. The updated coupe will likely be the first to see the light of day when we’ll get an accurate idea of what’s in tow for its roadster sibling.