Volkswagen Under Fire Over Dieselgate Report

VW board criticized at AGM over internal investigation.

Volkswagen has come under fire from shareholders at its annual general meeting for not releasing its internal Dieselgate report for fear of the legal consequences in the US.

Board chairman Hans-Dieter Poetsch told the meeting in Hannover that independent investigators had interviewed hundreds of witnesses in the "most comprehensive" investigation in German business history, but because of the deal reached with U.S. authorities following its guilty plea VW wouldn’t be able to publish the report.

Gerd Kuhlmeyer, head of staff shareholders group Community of VW, criticized company management and said that he remained “shocked and speechless” at the scandal, where Volkswagen admitted installing cheat devices on diesel engines to pretend emissions were lower than they really were.

Hans-Christoph Hirt, head of investment fund Hermes EOS, had campaigned ahead of the meeting for a vote of no confidence in the VW board and said publishing the report was “the only way to regain lost trust with investors and to win back customers. Only then [can it] be found out whether the company is drawing the right conclusions."

It also emerged Wednesday that Volkswagen CEO Matthias Mueller is now under investigation by public prosecutors in Stuttgart for possible market manipulation over the handling of how the Dieselgate scandal became public. According to the news weekly WirtschaftsWoche, German authorities are looking at whether Mueller in his role on the board of the Volkswagen parent company should have made the news public sooner. It is the first time that Mueller has been linked with the investigation.

Volkswagen presented a united front at its annual presentation, focusing on a battery-based future with plans for 10 new electric models by 2018 and 30 more by 2025. The company will invest nearly £8bn ($10B) into alternative fuel research in the next five years.

Mueller isn’t ready to drop gasoline and diesel engines just yet however, telling the VW AGM: "Conventional engines will remain indispensable for the foreseeable future – the internal combustion engine primarily is part of the solution, not part of the problem.”

The Dieselgate scandal began in September 2015, when the US Environmental Protection Agency issued a notice of violation to Volkswagen because it had found evidence of its cars infringing the Clean Air Act.

The company later admitted that it had fitted thousands of diesel cars with devices that allowed engines to fraudulently pass emissions tests in laboratories by limiting performance. 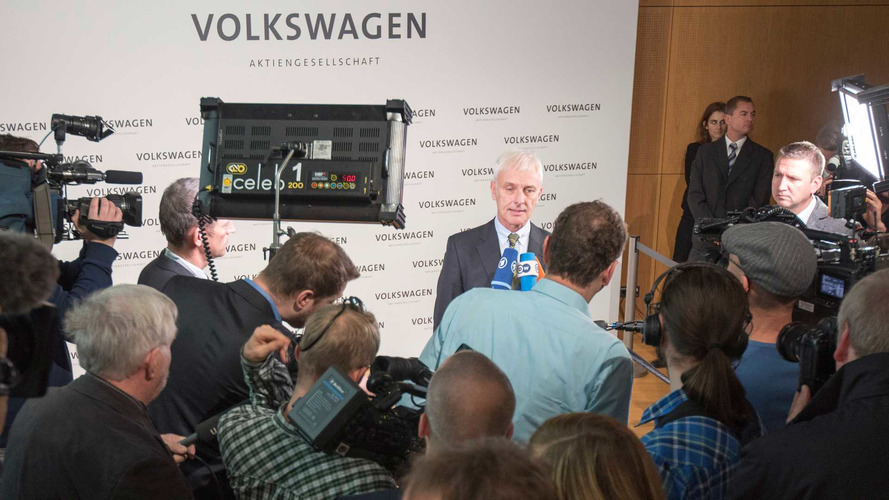 Volkswagen has been under investigation by government authorities across the world and remains so in many countries including Germany, despite having reached a settlement in the US. The company must pay more than £13B ($16.7B) in civil charges and a £2.2B ($2.8B) criminal fine imposed by a judge in April.

Mechanical and software fixes have been made available — VW told its shareholders that 2.3 million cars in Europe had now been updated, around half of all those affected in the region.

The scandal has put pressure on car makers across the industry, with many governments now looking to introduce tougher tests for diesel engines and some major cities looking to ban diesels altogether.