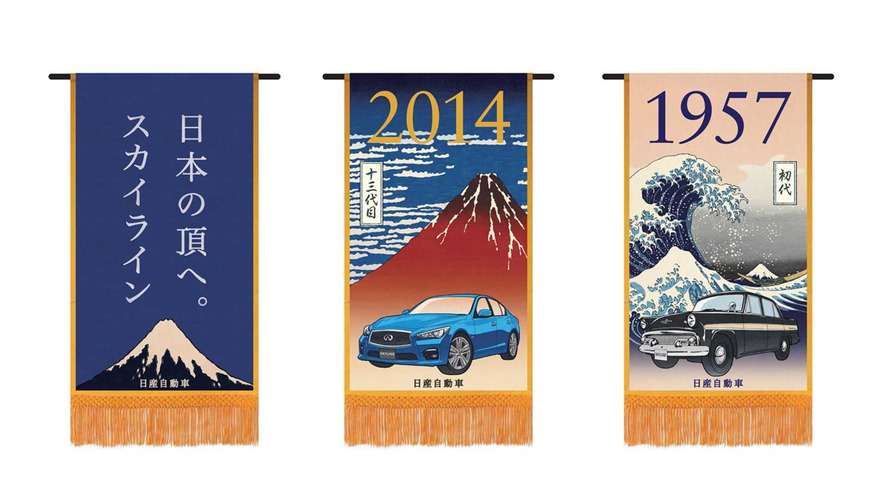 By combining cool cars and beautiful art, this project seems like a great idea to us.

For auto enthusiasts, the Nissan Skyline conjures up images of the legendary GT-R, but there’s far more to this venerable vehicle. The Skyline has been part of Japanese motoring since 1957. To mark this year’s 60th anniversary, Nissan has mashed up each generation of the model with a woodblock print from famed artist Hokusai.

Hokusai’s iconic image depicts a giant wave with a tiny Mount Fuji in the background, and the famous print serves as the backdrop in this set for the original Skyline. The first and second generations weren’t actually Nissans. The Prince Motor Company created the famous model, and when the automaker merged with Nissan in 1966, the Skyline remained in the lineup.

These images will be on display at the Grand Sumo wrestling location from May 14 through May 28, according to LeVolant Boost. The pictures are kitschy fun, and it would be cool for Nissan to offer them as a set of posters. They’d look really good decorating a Skyline fan’s garage.

Last year, Japfest, Europe’s largest show for celebrating Japanese cars and culture, held a poll to find the "Most Iconic Japanese Car Ever." The Skyline easily won. It beat the Toyota Supra and Subaru Impreza WRX in second and third place, respectively.

Today, the Skyline and GT-R are separate models in Nissan’s lineup. Outside of Japan, the Skyline is available as the Infiniti Q50. Unfortunately, the plan to place the GT-R’s 3.8-liter biturbo V6 into the sedan appears to be dead. It would have been quite a performance four-door.

Meanwhile, the GT-R continues to be on sale. Nissan refreshed the design last years. Rumors have suggested a hybrid powertrain for the next generation model, but there haven’t been clear indications about a timeframe for the new coupe’s arrival.