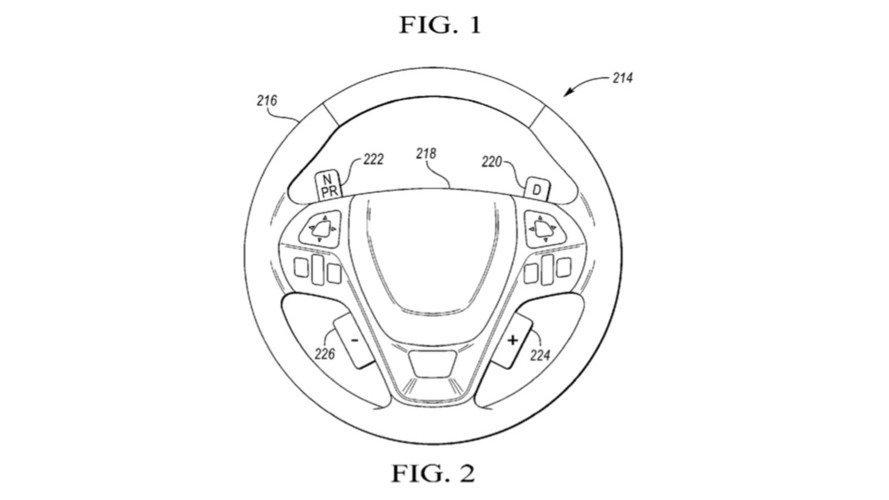 Because none of the logical options work, apparently.

Ford has an unusual patent application that could be applied to a hybrid or electric vehicle. If you've ever thought "I wish shifting gears was a bit more complicated," then Ford has you covered.

As you can see in the image above, there are two gear selector buttons built into the steering wheel. One puts the car into D (drive) and the other somehow selects Neutral, Park, or Reverse (no, it doesn't automatically find the local NPR station, despite what the letters on the patent drawing suggest). Just like any other shifting mechanism, the driver needs to push on the brake pedal before the car will change gears.

Why would anyone want to change gears with buttons on a steering wheel? Well, Ford's reasoning is that a system like this takes up less room and "the location of user shift selection on a center console or instrument panel may detract from aesthetics and limit styling flexibility."

But here's the part that would make this sort of shifter more confusing than what we have now:

In other words, you cycle through neutral, park, and reverse with the left button, but when you get to reverse, you can't get back to park without first putting the car into drive. Seems convoluted, no? That's just one idea Ford is offering in this patent, with another being that you could endlessly cycle through N-P-R-N-P... by repeatedly hitting the left button. Of maybe you could just hold the NPR button for a longer time to activate reverse. Basically, Ford hasn't figured out the best way to implement this, and seems to be covering its options in case it ever wants to put PRNDL controls onto your steering wheel.

Ford filed the patent back in November 2015, and given the problems with non-traditional gear selectors – see the  1.1 million vehicles with console-mounted shifters that Fiat Chrysler Automobiles had to recall – we won't be surprised if this idea never leaves the confines of the U.S. Patent Office. This is an idea someone at Ford thought was good enough to write out, though, so keep an eye out.