Most Successful Porsche Race Cars Reunite at 12 Hours of Sebring 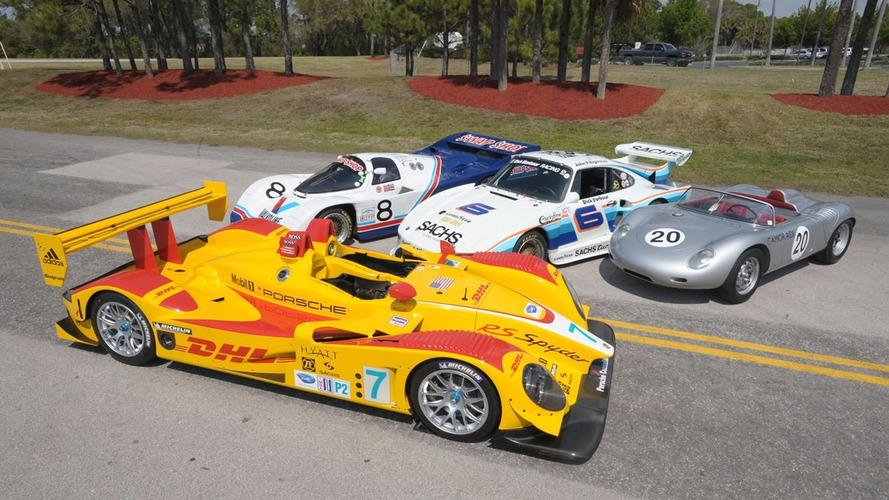 This is a rare moment in motorsports history. On display are most of the Porsche cars which raced to victory at the 12 Hours of Sebring over the years.

Porsche's successes at the 12 Hours of Sebring in Florida are on display for all to see. The German automaker is the most successful competitor at the race after covering 18 overall wins and 65 class wins.

In this special group photo the cars featured are a 718 RS 60, and RS Spyder, the 935 and a 962. Each of these has contributed to Porsche's achievements on that event. The 718 RS 60 took Porsche's first overall win at the race in 1960 under the guidance of Hans Herrmann from Germany and the Belgian by the name of Olivier Gendebien. At the time the 718 RS 60 was a compact, lightweight racer with a 160hp 1.6-litre engine. Thanks to its exploits of beating bigger more powerful cars it earned the nickname "Giant Killer."

The Porsche 935 was a formidable force in Sebring between 1978 and 1984. Power came from a 2.85-litre 6-cylinder turbo engine making 590hp (434kW). It ran circles around rivals on the track seven times in a row and became a racing legend in the process. Interestingly no one driver drove the car for more than one season during those seven glorious years.

Immediately after the 935 came the 962 which plotted four wins in a row beginning with the unit driven by American A.J. Foyt Jr and Frenchman Bob Wollek. The car's 2.85-litre turbo motor produced 680hp (500kW).

The 2008 RS Spyder recorded Porsche's latest win, twenty years after the 962. It was led by the team of Timo Bernhard (German), Romain Dumas (French) and Emmanuel Collard (French). Even though it was competing in the LMP2 category it beat all the other cars in the faster LMP1 because of reliability and fuel consumption. The RS Spyder's less powerful 478hp (352kW) 3.4-litre V8 engine did not seem to hamper it. It was 200hp (147kW) less potent than rivals.