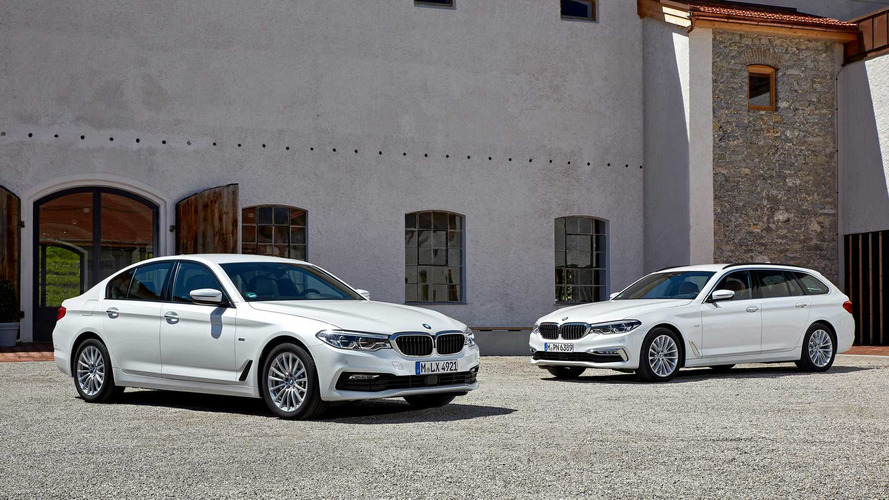 Most of the novelties will be available from July 2017.

Just like every spring, BMW is introducing a series of improvements, new engines, and new options for part of its model lineup. Probably the most important news this time is the expansion of the engine range for the 5 Series in both sedan and wagon versions.

The 520i will take the position of an entry-level variant from July this year, offering a 2.0-liter turbocharged gasoline engine with 184 horsepower (135 kilowatts) equipped with an eight-speed automatic gearbox as standard. In the sedan, the unit provides 0-62 miles per hour (0-100 kilometers per hour) acceleration in 7.8 seconds, while the wagon needs 0.4 seconds more to perform the sprint.

Diesel fans would probably be happy to hear the 5 Series is getting two new diesel engines – one 2.0-liter, four-banger with 231 hp (170 kW) and 369 pound-feet (500 Newton-meters) of torque, and a bigger 3.0-liter motor for the 540d xDrive version with 320 hp (235 kW). These two new diesel options will join the already available engines and the recently introduced M550d xDrive, which also goes on sale in July.

Also notable for the model is the addition of xDrive as an option for two more models – the 520d and 530i will be offered with BMW’s all-wheel drive system from the summer of 2017. The 5 Series also gets new customization options for both the exterior and the interior.

BMW has also upgraded the base three-cylinder engine for the 2 Series Gran Tourer and the X1 to deliver additional 4 hp (3 kW) for a total of 140 hp (103 kW). In the seven-seat minivan the engine will be mated exclusively to a six-speed manual gearbox, while in the crossover a seven-speed dual-clutch automatic will be offered as an option. The X1 also gets a reworked 2.0-liter gas unit, which delivers 192 hp (141 kW) to the front wheels.

From July this year, the 7 Series will get a multifunction instrument display as standard, as well as rear view camera, Driving Assistant, and Parking Assistant which will be featured in every model from the range. Also, all 750i and 750d models will be additionally fitted with massage driver and front passenger seats as standard.

Last but not least, the 1 Series, 2 Series, 3 Series, X1, X5, X6, as well as the M2, M3, X5 M, and X6 M will all benefit from the new menu structure on the iDrive Control Display and the touch screen function for the onboard monitor.

BMW model upgrade measures for the summer of 2017.

Munich. From the summer of 2017, greater diversity in the engine portfolio of

the new BMW 5 Series, an extended range of standard equipment for many

technology, operation, comfort and connectivity will enhance the attractiveness

of the BMW vehicle range. Starting in July, the Sedan and Touring models of

four-cylinder petrol engine. Furthermore, there will be a choice of two additional

enhanced petrol engine with 3 cylinders. The extended range of standard

ConnectedDrive navigation package for the BMW X5 and the BMW X6. All

LED headlights and light alloy wheels as standard equipment. In keeping with

their dynamic character, the most powerful diesel or petrol models will now be

offered at least in the Sport Line equipment configuration.

As from July, the Control Display of the iDrive operating system will feature in

many additional models a functional menu boasting a sophisticated tile

arrangement with animated live graphics. Moreover, it will also be possible to

navigation system Professional or with the option Navigation or Navigation Plus

system is based on intelligent networking and car-to-car communication. The

5 Series model range. The new petrol and diesel power units have been taken

from the BMW Group’s current model generation. They boast optimised

The 2-litre, four-cylinder petrol engine delivering 135 kW/184 hp and a

power unit as from July 2017. It features a twin scroll turbocharger, direct petrol

injection, VALVETRONIC and double VANOS and comes as standard with an 8-

speed Steptronic transmission. The new BMW 520i Sedan accelerates from 0

further four-cylinder and an additional straight six-cylinder variant. Both power

units set benchmarks in each of their displacement classes for spontaneous

power delivery, pulling power and efficiency. This is above all the result of the

It comprises multi-stage supercharging with variable turbine geometry for both

The 2-litre, four-cylinder diesel engine for the new BMW 525d Sedan and the

and a peak torque of 500 Nm. Both models also come with an 8-speed

Steptronic transmission and complete the sprint from 0 to 100 km/h in 6.6

km and CO 2 emissions of between 126 and 116 grams/km. The corresponding

to 124 grams/km (figures as per EU test cycle, depending on selected tyre size).

combination of a straight six-cylinder diesel engine, an 8-speed Steptronic

transmission and intelligent four-wheel drive technology provide for both

Touring model (figures as per EU test cycle, depending on selected tyre size).

Including the exceptionally sporty BMW M Performance automobiles and the

BMW 5 Series now offers a choice of ten engines in all. Starting in July, this will

transfers the power of many further engines with a high level of traction,

supremacy and dynamics to both surfaced and unsurfaced roads.

BMW 5 Series Touring. The BMW 520d xDrive Touring is powered by a four-

accelerates from 0 to 100 km/h in 7.9 seconds and achieves an average fuel

BMW 530i xDrive Touring, xDrive distributes the power of a four-cylinder petrol

combination facilitates the sprint from 0 to 100 km/h in 6.3 seconds, resulting in

149 grams/km (figures as per EU test cycle, depending on selected tyre size).

New options from BMW Individual for the BMW 5 Series.

Individual will also be offered for models of the BMW 5 Series. The range of

exterior options are particularly exclusive in terms of design, choice of materials

and craftsmanship and comprise expressive and effective BMW Individual body

trim Merino fine grain, both available in the colours Smoky White, Tartufo and

Caramel. Also new in the range of options are interior trim strips in the BMW

In July 2017, the entry model of the BMW 2 Series BMW Gran Tourer and the

BMW X1 will see an upgrade. The new three-cylinder engine delivers a power

the BMW X1 sDrive18i. With the new power unit under its bonnet, the spacious

accelerates from 0 to 100 km/h in 9.4 seconds. Combined fuel consumption of

and optionally with a 7-speed double-clutch Steptronic transmission. The

compact all-rounder now sprints from a standstill to 100 km/h in 9.6 seconds,

achieving an average fuel consumption of between 5.6 and 5.5 litres per 100 je

Starting in July 2017, the BMW X1 will be available as an sDrive20i model

accelerates from 0 to 100 km/h in 7.6 seconds. Combined fuel consumption is

grams/km (figures as per EU test cycle, depending on selected tyre size).

Extended range of standard equipment for the BMW 7 Series and

From July, the attractiveness and premium character of many models will be

further increased thanks to a targeted extension of their standard equipment

range. As a result, the exclusive experience of driving the BMW 7 Series is now

further underscored by the addition of a multifunction instrument display

(analogous to the BMW M760Li xDrive). The cockpit displays comprise a fully

mode selected via the Driving Experience Control switch. The number of

are additionally fitted with comfort seats including massage function for driver

and the BMW 3 Series Touring. In order to underscore their exceptionally

dynamic characteristics, the most powerful variants with petrol or diesel engine

will be available at least in the Sport Line equipment configuration. The models

navigation package as standard. Furthermore, the standard equipment for the

BMW X5 will be complemented by a sports steering wheel. A multifunction

ConnectedDrive services allowing, among other things, the integration of

and the BMW 2 Series Gran Tourer. In future, automatic tailgate operation will

come as standard on the BMW X1 models Advantage, Sport Line, xLine and

look and particularly intuitive operation. As from July 2017, both this feature and

models of the BMW 1 Series, BMW 2 Series and BMW 3 Series, for the

available for models of the BMW 4 Series, the iDrive system of which already

pages. The driver is able to change the order of these buttons. Each of them

button for the entertainment programme, whilst the current vehicle position on

the map is depicted on the tile graphics for the navigation system.

ConnectedDrive Services as standard in all current BMW models.

Parallel to this, BMW continues to expand its lead in the area of intelligent

networking across all vehicle segments. The standard equipment of all current

provides information on slow-moving traffic and traffic jams on motorways,

secondary roads and many inner-city routes. Thanks to intelligent networking,

traffic information is transmitted to the vehicle in real time. As from July 2017,

warning. This service makes use of advanced car-to-car communication,

whereby information on hazardous traffic situations are shared between

networked BMW fleet vehicles. Details of restrictions caused for example by an

accident, a breakdown, dense fog, heavy rainfall or black ice are processed in

the backend of the vehicle and transferred to the navigation system. The

innovative hazard warning function is available not only for current BMW models,

but for all BMW vehicles registered since the year 2013 and offering RTTI.

with the targeted search for a parking space in metropolitan areas. The digital

models, also uses intelligent networking to calculate the chance of finding a

vacant roadside parking space from current and past data. This service is

available for an increasing number of cities. In July 2017, further cities in Austria

– Vienna, Graz, Innsbruck and Salzburg – as well as in the Netherlands –

Amsterdam, Rotterdam and Utrecht – will be added.