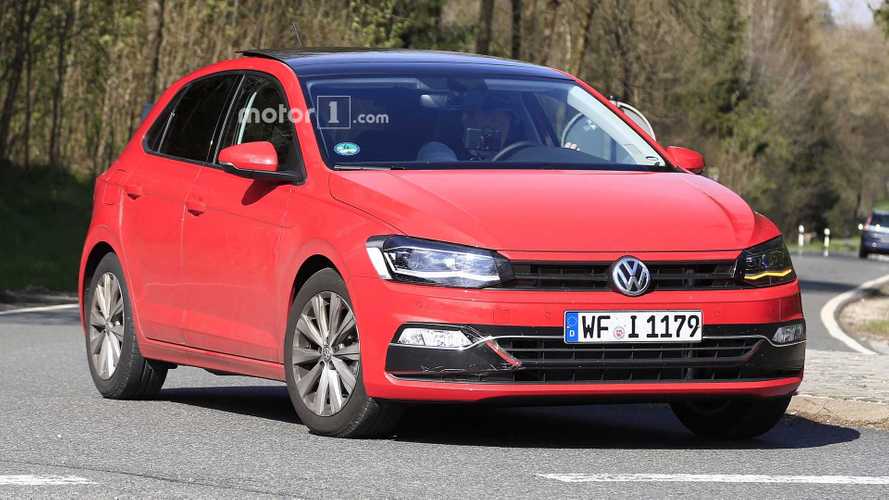 Trust us when we say this is the new one...

For good reason, at first you would be tempted to say this is merely facelift for the current Polo, but in fact these two prototypes belong to the new generation. The red and black duo was spotted roaming the streets with barely any camouflage, thus suggesting an official reveal is right around the corner. With Volkswagen confirming production of the all-new supermini will start next month, it means the sixth-gen model will likely receive its premiere in the weeks to come.

Visibly bigger than the outgoing car, the new Polo is trying to hide its headlights and taillights behind some semi-transparent stickers also slapped onto the fog lights. We can already observe the “zigzag” LED daytime running lights doubling as turn signals while above them are likely the optional full-LED headlights as it’s the case with sister model 2017 SEAT Ibiza.

There are still a few very thin layers of body-colored camouflage on some of the panels, but even so we can get a pretty accurate idea of the Polo’s exterior styling. To characterize it using just one word — evolutionary. More significant changes are expected to occur inside the cabin, which is set to offer considerably more room as a result of the increased footprint. It will be interesting to see whether the three-door version will live to see a new generation or it will be axed as it was the case with the Ibiza SC due to a lack of demand.

The two models are sharing the VW Group’s MQB A0 platform and that means the Polo will get virtually the same oily bits as its Spanish counterpart. An array of three- and four-cylinder engines will be offered, including the newly developed 1.5-liter TSI Evo already available in the Golf facelift with 150 hp and very soon in a thrifty 130-hp BlueMotion flavor. The crown jewel of the range will once again be the GTI hot hatch already confirmed to get somewhere in the region of 200 horsepower by making use of the same 2.0-liter TSI engine as the sixth-gen Golf GTI. The Grand Touring Injection will follow shortly after the regular model’s debut, so expect to see it in just a few months.

For the first time ever, the Polo will serve as foundation for a subcompact crossover likely destined to arrive towards the end of the year or early 2018 following the launch of the very similar SEAT Arona. The next-gen Skoda Fabia will get the same underpinnings and it will likely spawn a B-segment crossover as well.