Mercedes G63 50th Anniversary Gets Black And Blue In Japan 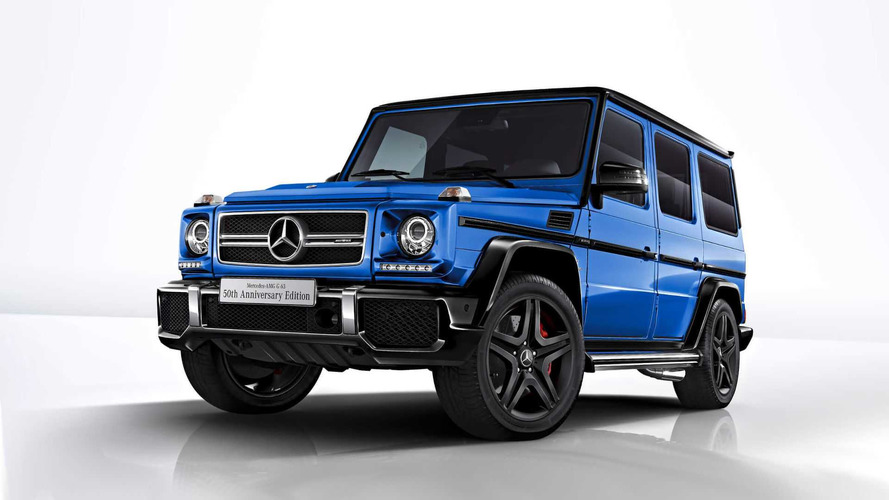 The company will build just 50 of them, and they'll be available in four interior colors.

A week after introducing the Star-Wars-themed versions of the CLA180, Mercedes Japan has another exclusive special edition for customers in the country by launching the Mercedes-AMG G63 50th Anniversary Edition there that celebrates AMG’s time in business.

The limited run of 50 units feature an exterior in Mauritius Blue metallic paint that looks brilliant on the G63. For contrast, the bumpers, roof, fenders, mirrors, and side trim come in gloss black. A set of 20-inch AMG five-spoke wheels matches the dark look.

Inside, Mercedes covers the interior with its high-end Designo leather with diamond stitching, and 50th Anniversary Edition is available in four two-tone shades. The company will build 24 units with Porcelain white, 15 in black, 6 in Mocha Brown, and 5 in Saddle Brown. Three of them will also include black leather for a two-tone look. An AMG Carbon Fiber trim package will also lend a sporty aesthetic.

Mercedes leaves the G63 alone for this special edition. Power comes from a 5.5-liter biturbo V8 that produces 563 horsepower (420 kilowatts) and 561 pound-feet (761 Newton-meters). The output routes through a seven-speed automatic gearbox. It gets the SUV to 60 miles per hour (97 kilometers per hour) in 5.3 seconds and an electronically limited top speed of 130 mph (209 kph).

Mercedes is currently developing the next-generation G-Class. While spy shots show that it retains a rugged look, there's a new platform underneath that should help the vehicle shed a significant amount of weight. The new body looks bigger, too. Multiple body styles also appear to be in the future lineup, including a long-wheelbase version.