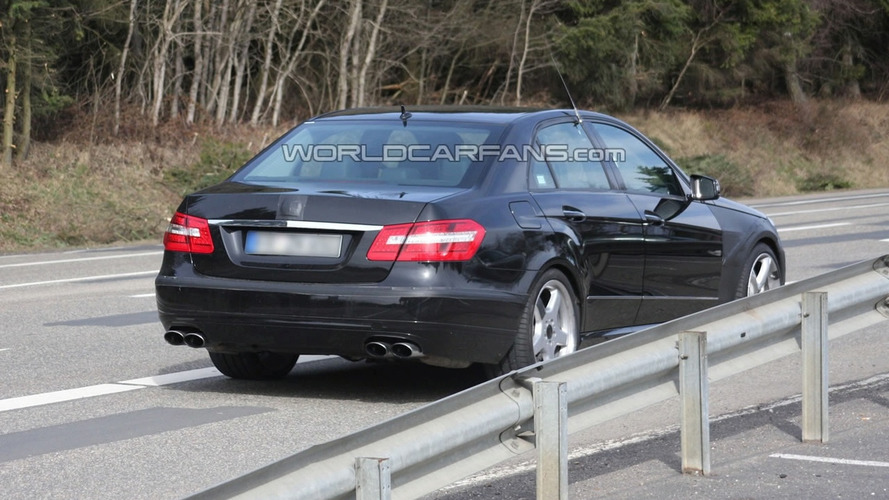 New spy pictures reveal almost the entire rear end of the next E63 AMG sedan. LED lights and oval tailpipes of the 525hp beast are exposed in these clear pictures.

Mercedes-Benz is known for not wasting any time introducing AMG versions of their cars. The new 2010 E-Class has been revealed and soon the new E63 AMG will be too. These spy photos show the car's rear end completely uncovered.

The rear lights are LEDs and the four tailpipes are shaped like ovals. Although not very visible we expect the front end to be characterised by a sporty grille with a honeycomb mash design. The wheels look suspiciously un-AMG so they may not be the final chosen design for a standard E63 AMG.

Details of the engine are not too detailed with Mercedes-Benz only willing to divulge the car's power figure of 386kW (525hp). Murmurs of "underpowered" were heard on many a fan's lip when this figure was released because it clearly falls short of the Audi RS6's 426kW (579hp). At this level of power the E63 AMG should only be able to face up to the new Jaguar XFR, not the RS6.

But Mercedes has declared that the power wars are over and it will now concentrate on fuel-efficiency rather than extreme performance. We can't help wonder if BMW and Audi will be compliant for their next weapons of choice in this segment.

Spy pictures have also revealed the E63 AMG Estate and both versions are expected to be officially unveiled at the same time during the 2009 Frankfurt International Motor Show in September.