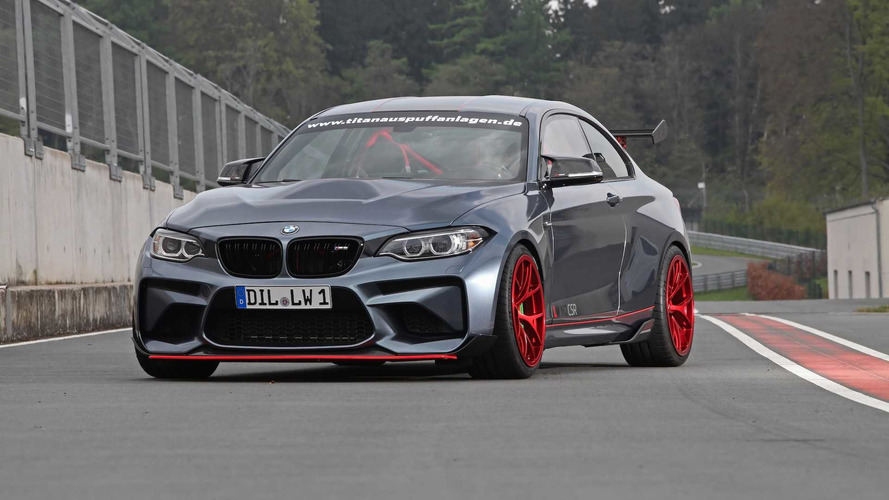 That's 245 extra horses on top of the standard M2.

While we all sit around anxiously hoping for the arrival of a hotter M2 CS and an even hotter still M2 CSL, Lightweight Performance out of Germany, not one to wait, has gone and built a faster M2 all their own. It’s dubbed the M2 CSR – which stands for "Carbon Sport Race" – and what it lacks in subtlety, it more than makes up for in performance.

The most important upgrade comes in the engine, obviously. The original M2 engine has been swapped for the M3 and M4's S55 six-cylinder, which now produces a whopping 610 horsepower (456 kilowatts) and 568 pound-feet (767 Newton-meters) of torque. That’s 245 hp and 225 lb-ft more than the standard M2, for those of you keeping count.

With all that added power the M2 CSR should be able to sprint to 60 miles per hour (96 kilometers per hour) in well near three seconds flat, and will continue on to a top speed of 203 mph (328 kmh). It all comes managed via a standard six-speed manual, or BMW's optional seven-speed automatic, with power sent to the rear wheels exclusively.

The body is aided by a handful of new aerodynamic upgrades, including features like a more aggressive front splitter, a massive rear wing, and a new set of lightweight forged wheels wrapped in Michelin Cup 2 tires that measure in at 265/35-19 and 295/30-19. Inside, the cabin is coated nearly every inch with carbon fiber and red accents, including a rear seat delete that sees the addition for a roll cage, because safety.

No word on pricing just yet, but Lightweight Performance says you can pick up a completed version from the shop directly, or you can bring in your already-owned M2 for a full conversion. Just don’t expect all that extra power to come cheap.