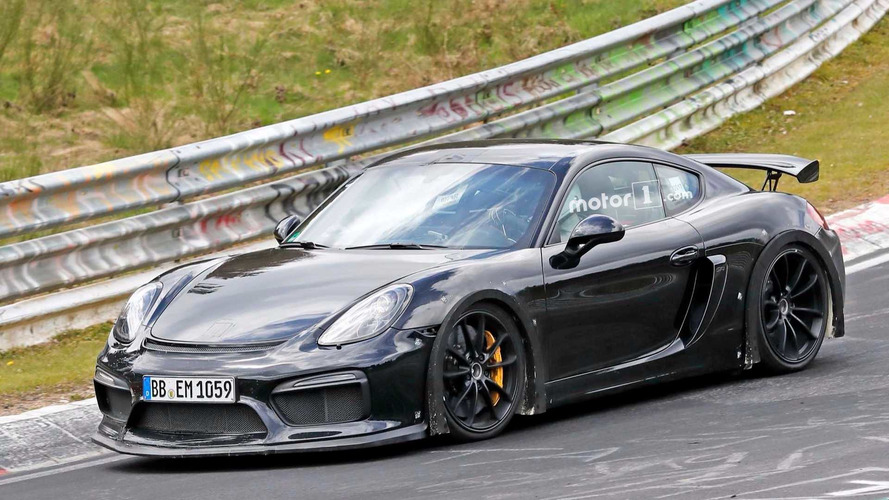 The next-generation GT4 will likely have at least 400 naturally aspirated horsepower.

Back in February the internet was all abuzz with a curious Instagram post from a Porsche dealer that specifically mentioned a Cayman GT4 RS with a naturally aspirated 4.0-liter flat six. Rumors of such a beast have been around for a while now, and though Porsche has more-or-less denied something with the RS moniker is imminent, there’s still all kinds of room for interpretation. Adding fuel to the RS fire are these latest spy shots of a Cayman GT4 prototype testing at the Nurburgring.

It’s quite likely we’re looking at a mule undergoing extensive suspension testing, as evidenced by foam in the wheel wells that give this prototype a wider appearance. Why would you put foam in wheel wells? Flinging something as dynamic as a Cayman around the Nurburgring will certainly compress the suspension and foam can help determine deflection when new variables are added, among other things.

With the current 718 Cayman now sporting a turbocharged 2.0-liter four cylinder, a flat six with double the displacement would certainly be a new variable when considering suspension setups. And the somewhat janky exhaust sticking out the back further supports the theory that this car is packing something new in the power department.

Porsche’s GT development head Andreas Preuninger has said the next GT4 will be naturally aspirated. The only option on the table would be a retuned version of the 4.0-liter mill offered in the forthcoming 911 GT3. We say retuned because that engine makes 500 horsepower, and as insanely epic as that would be in a Cayman, a power estimate in the 400-horsepower range makes more sense. Will it be a GT4, or will such power result in the Cayman also receiving an RS badge? Either way, it will surely be awesome.