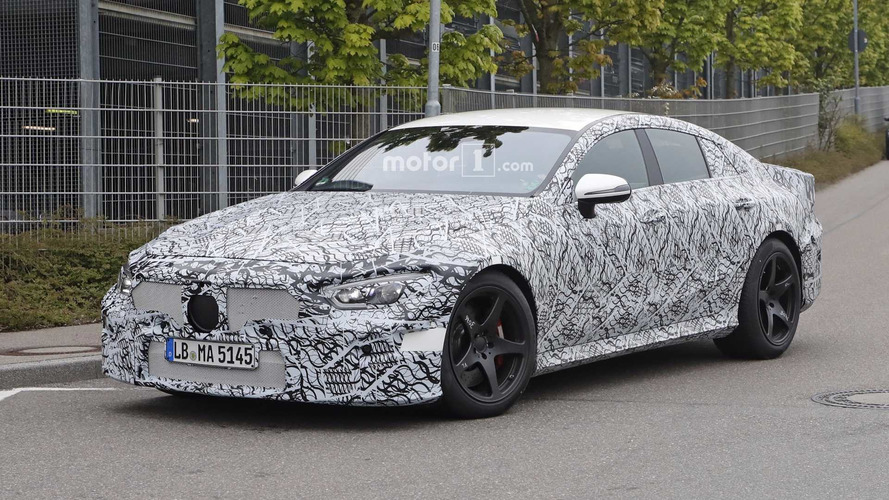 The Panamera-fighting AMG poses for the camera.

Spied for the first time almost two months ago, the four-door Mercedes-AMG GT is back in a fresh batch of images showing a prototype disguised to look a lot like a hot CLS. There are more than just a few similarities between the two, but that’s just because of the clever camouflage.

Look closer and you’ll see the GT has different headlights with a new shape and a modified design in line with the concept from the Geneva Motor Show.

The back of the AMG GT reveals the third brake light will sit up high on the window whereas on the CLS it will be mounted low. It’s likely a sign the four-door AMG GT will be a hatchback like the Porsche Panamera while the CLS will soldier on as a sedan — though Mercedes calls it a “four-door coupe.” The roofline and greenhouse seem to be a tad different as well. Thankfully, the GT’s ungainly rear hump won’t be there on the production car as that’s just an extra layer of camo to mask the real design.

While the previous GT prototype had gold brake calipers like the concept, this new test vehicle has red ones and only for the front axle. The back of the car hosts the same menacing quad exhaust system with black tailpipes flanking what we assume is a beefy diffuser.

Lurking underneath the hood is probably the familiar biturbo 4.0-liter V8 engine capable of developing as much as 603 hp and 627 lb-ft (850 Nm) in its highest state of tune in the the E63 S. But since it will be part of the GT family, the new four-door model might not surpass the 577 hp and 516 lb-ft (700 Nm) offered by the GT R range topper.

Let’s keep in mind the aforementioned concept had a hybrid setup with the same V8 engine working together with a rear-mounted electric motor for an immense combined output of 805 hp. That might make it to production at some point in the model’s life cycle.

It will be interesting to see whether the CLS63 will live to see another generation taking into account the new four-door AMG GT due to arrive in the next couple of years is going to fulfill just about the same role.