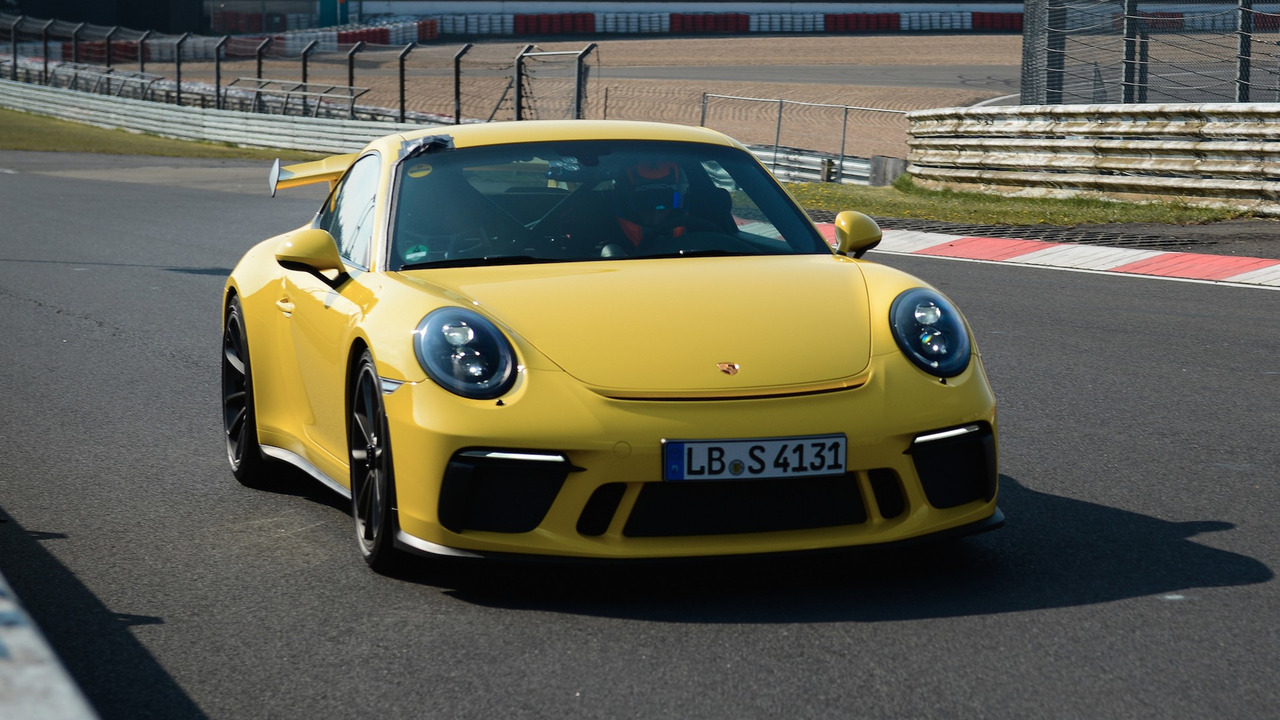 A whopping 12.3 seconds quicker than the outgoing model.

Update: Porsche has released an in-car video of the lap. It is embedded below.

An extra 25 horsepower (18 kilowatts) and some added aero work seemingly does the 911 well. Porsche took its new and improved 2018 911 GT3 to the Nurburgring, and in just one day, it bested the outgoing model by more than 12 seconds. That makes it one of the fastest cars, let alone Porsches, to ever lap the ‘Ring.

The GT3 was driven by Porsche test driver Lars Kern, and was equipped with the standard PDK transmission, rear-axle steering, optional carbon ceramic brakes (an extra $9,210 add on), and a set of Michelin Pilot Sport Cup 2 tires. All features you can get straight from the factory.

As far as bodywork is concerned, a new front fascia optimizes airflow, and a larger front and rear diffuser boosts the car’s aerodynamic properties. At the end of the day, the new 911 GT3 only received minor tweaks over the outgoing model… but those tweaks were more than enough to give it a new Nurburgring record.

The new Porsche 911 GT3 has celebrated its first day on the Nürburgring with a lap time of 7 minutes, 12.7 seconds for the legendary Nordschleife. The road-approved 911, with specifications similar to its motorsport counterpart, beat the time set by the previous model by 12.3 seconds.

“By achieving this time, we have emphatically proven that the new 911 GT3 not only provides the best driving experience, but can also deliver an impressive performance on the Nordschleife. The focus was on optimising the driving quality and adapting to the slight increase in engine power”, says a delighted Frank-Steffen Walliser, Vice President Motorsport and GT cars at Porsche. “A few years ago, lap times like this could only ever be achieved by thoroughbred racing cars with slick tyres”, adds Andreas Preuninger, Director GT Product Line. “The new GT3 can now achieve this with comparatively modest power, but is still fully suited to everyday use.”

The 911 GT3 also relies more on pure racing technology than the previous model. Its 368-kW (500-hp), high-rev, naturally aspirated engine can also be found in the 911 GT3 Cup racing car. Equipped with rear-axle steering, a seven-speed Porsche Doppelkupplung (PDK) and Michelin Sport Cup 2 N1 tyres, the sports vehicle approached the starting line in the Eifel in its standard trim. At an air temperature of 8 degrees and an asphalt temperature of 14 degrees, the conditions for Porsche test driver Lars Kern were ideal for racing. The road-approved rear-wheel drive Coupé recorded its best time under notarial supervision. “If you can drive fast on the Nordschleife, you can drive fast anywhere in the world”, Frank-Steffen Walliser comments.