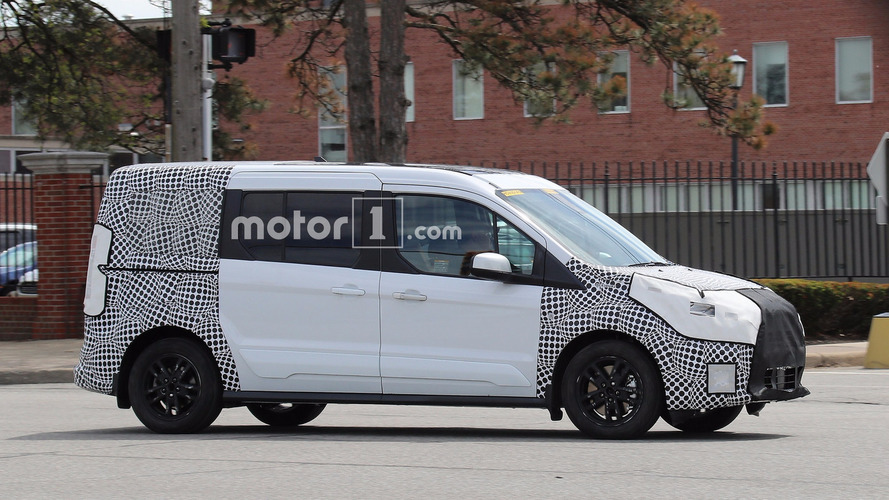 In early March, our photographers spied the Transit Custom undergoing cold winter tests somewhere in Scandinavia, and now its little brother, the facelifted Transit Connect, is also entering the pre-production test phase. This prototype has been caught with some light camouflage on the streets of Dearborn, Michigan.

Just like the Transit Custom for Europe, the Connect will get slightly refreshed for the new model year. It will bring minor visual tweaks – probably revised bumpers and new graphics for the lights, as well as some tech updates, including a new 10-speed automatic transmission. Also, expect to see slightly more efficient engines.

The 2017 Transit Connect, in long wheelbase variant as seen in the attached spy photos, offers up to 149 cubic feet of storage and a 1,610-pound payload rating – and we expect these numbers to remain unchanged. The smaller, short wheelbase van has a maximum 124.3 cu. ft. of cargo space and 1,470-lbs payload rating.

In its passenger version, the van has room for five, six, or seven passengers, depending on the seats layout. The rear seat backs can be folded (or the seats removed in the short wheelbase model) for carrying more cargo, while the front passenger seat back can be folded flat to serve “as a writing surface or a platform for a laptop.”

The Transit Connect already benefits from Ford’s latest generation SYNC3 system with touchscreen display and smartphone connection. We expect the 2019 model to get some updates for the infotainment system, but in general it will be identical to the current one.