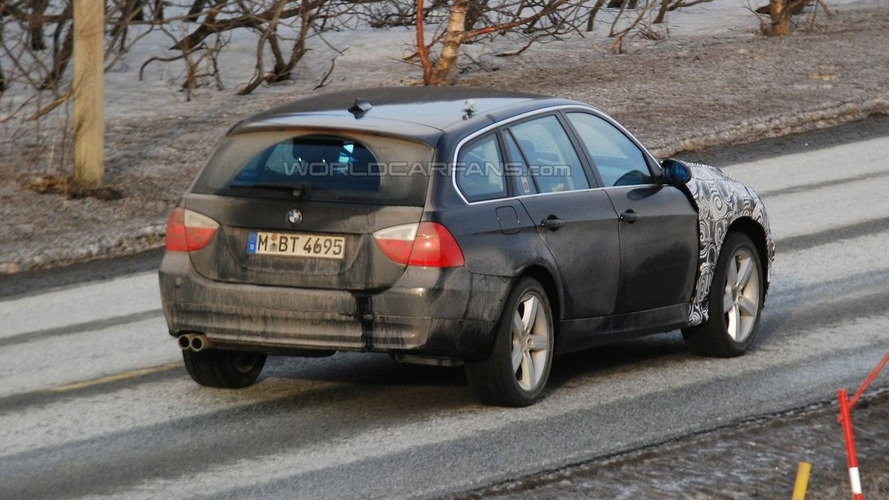 A curious "hybrid" BMW 3 Series has been spotted undergoing some winter testing in northern Norway. No clear info on it yet but it appears to be another new engine testing for the Munich brand.

Soon there will be new speculation about these spy pictures which were taken in the cold northern Norwegian town of Bodoe. The only report we have is that the car is supposedly a "hybrid" of sorts that combines the rear look of the pre-facelift BMW 3 Series Touring with the front end of the upcoming X1 compact SUV.

Why BMW is testing such a two-bodied vehicle is still a well covered-up mystery dressed in black and white camouflage. However three reasons can be speculated. One is that BMW is experimenting with an Audi A4 allroad rival which would have a raised suspension, as seen in the rear view photo, and run on the xDrive AWD system.

Another could be that they are testing a brand new engine. Two years ago BMW was spotted testing the new 4.4-litre twin turbo using a 5-Series body and speculation went ballistic that it was a new M5 engine, which of course it wasn't. So we know they have a history of just testing engines using old bodies, but that doesn't explain why they are using camouflage on the front end.

That leads us to the third reason. Notice how the X1 lookalike camouflage does not quite fit from the front fender. Its oversized dimensions extend not only to the sides but up top as well. This would suggest that BMW could be hiding the entire front end of a new model which is housing a new engine - possibly a turbo petrol or a hybrid engine. Given Bavaria's rumoured four-cylinder petrol turbo engine we are inclined to lean towards this type of powerplant rather than a hybrid. Besides, the hybrid powertrain has been tested plenty of times before including in the X6.

What do you think? Check out the poll below.