We'd love to know how quickly this hypercar can lap the famous track.

The McLaren P1 GTR LM is a rare beast with just 27 examples of the hypercar undergoing Lanzante Motorsport’s road-legal conversion of the generally track-only model. However, the coupe’s extreme scarcity doesn’t stop the driver of this example from pushing it hard around the Nürburgring.

According to the vid’s YouTube description, this P1 GTR LM was lapping the ‘Ring during industry pool testing on April 27. It’s amazing to see how easily the hypercar negotiates the corners. The driver barely appears to lift off the throttle during turns, and the biturbo V8 sounds amazing.

Lanzante Motorsport boss Dean Lanzante has been vocal about his desire to take the P1 GTR LM around a timed run of the ‘Ring. “We’ve seen what the road car is capable of there and we’ve got simulations of what our car can do,” he told Autocar last summer. “Kenny Bräck is doing all of the driving, so if an opportunity arose, we have the right man for the job.” A video in November showed one of the hypercars lapping the Green Hell. That car had a different license plate number from the one in this clip.

Bräck and the P1 GTR LM already holds the record for road-legal vehicle at Goodwood's 1.16-mile (1.86-kilometer) hillclimb. Last year, the driver hustled the hypercar up the course in just 47.07 seconds. 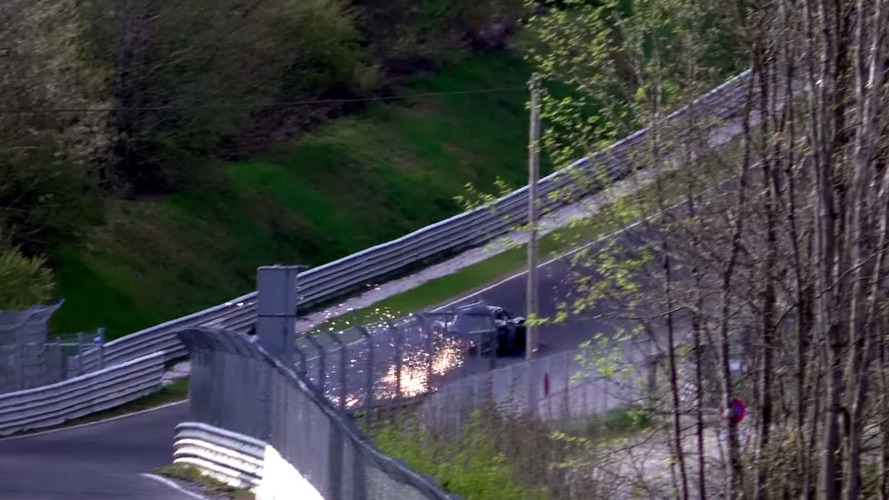 Lanzante Motorsport charges P1 GTR owners 240,000 pounds ($310,000) to perform the road-legal conversion. The completed vehicles boast 986 horsepower (725 kilowatts), track-honed aerodynamics, and a lift system for negotiating speed bumps. Examples don’t come up for sale very often, and sellers ask big money for them. In October 2016, a dealer in France wanted the equivalent of $4.3 million for one, and RM Sotheby’s has estimated an LM could sell for 3.2 million to 3.6 million euros ($3.4 million to $3.82 million) at an upcoming auction at Villa Erba.

Given those prices, seeing this one kick up sparks is a little more impressive. This driver clearly doesn’t seem too worried about lowering the value of the rare hypercar.