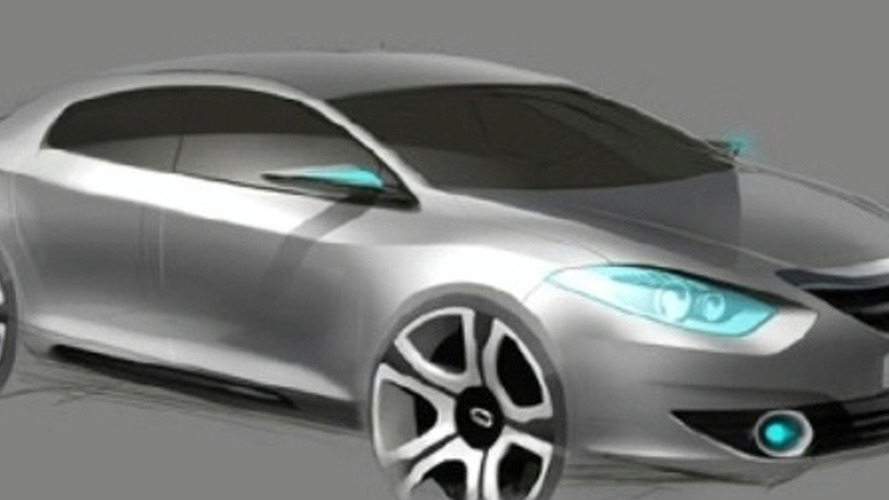 Sketches of the Samsung eMX concept have surfaced ahead of its April debut in Seoul. The car should eventually hit the market as the 2010 Samsung SM3, and may keep a very similar look.

Sketches of the the Samsung eMX concept have surfaced ahead of its April debut at the Seoul Motor Show. Produced by Renault-Samsung Motors, the concept is a preemptive look at what the 2010 Samsung SM3 sedan might look like. The concept is said to have been developed by over 400 Renault-Samsung engineers from France, Japan, and South Korea.

And yes, that is the same Samsung as the electronics company. The firm's automotive division was created in the mid-90s, with Renault purchasing 70% of the division in 2000 after Asia's late 1990s financial crisis hit South Korea. Renault now owns about 80% of the venture.

The eMX, or eco-Motoring Experience, will have a 2.0-liter turbocharged engine. A naturally aspirated 136hp 2.0-liter engine is available on the current Samsung SM3/Nissan Bluebird Sylphy. Perhaps the eMX uses a similar engine as the 205 hp 2.0-liter turbo found on the new Renault Laguna GT. That engine, with 300 Nm maximum torque, would make many compact cars a fun ride. An engine like this would really up the ante in the Korean sedan wars. The best performing engine found on the current Hyundai Elantra is a 138 hp 2.0-liter DOHC petrol, while the Kia Forte has access to a 2.4-liter CVVT engine that generates 173 hp.

Although the concept has a futuristic look on paper, you can clearly see how many of the design cues could make it to production. The elongated hood maybe connects to the front end by forming a bit of a wedge shape, and the wheels are a bit oversized (on paper), but beyond that, the car could manage to keep a similar look when it hits the market. Look for Renault-Samsung to try and put their best foot forward with the Samsung eMX by showing off top shelf safety systems, and more environmentally friendly technologies.

With Hyundai and Kia making production cuts in favor of R&D investment, Renault-Samsung has an opportunity to gain market share in the immediate future. They need the Samsung eMX concept to generate enough excitement to indirectly hype up the 2010 Samsung SM3. Look for more information about the concept car in the run-up to its April debut.