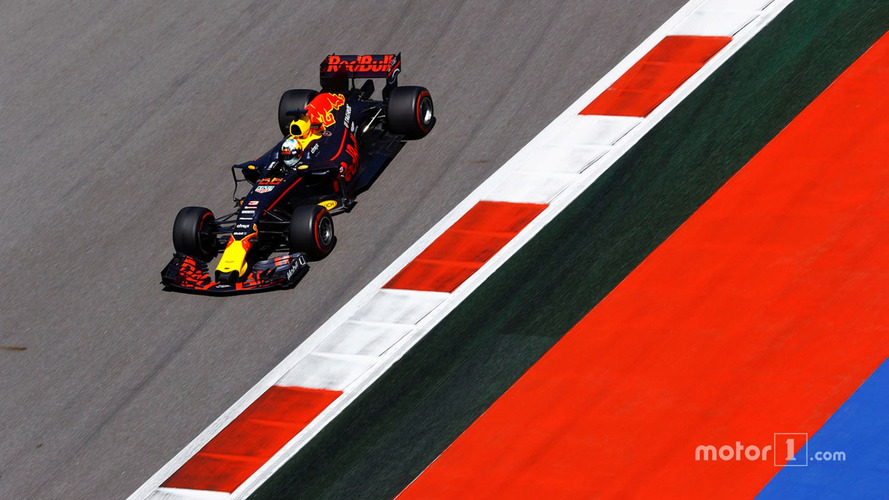 Saturday's qualifying session for the 2017 F1 Russian GP at Sochi comes to an end. Here are the results.

Ferrari had led the way throughout free practice, but trailed Mercedes through Q1 and Q2, where both Vettel and Kimi Raikkonen made an extra run compared to Lewis Hamilton and Valtteri Bottas in the latter segment.

But Ferrari turned things around in Q3, where Raikkonen sat on provisional pole after the initial runs, just ahead of Bottas and Vettel, with Hamilton trailing in fourth after twice snatching the inside front brake on his hot lap.

Raikkonen looked set to claim his first pole since the French GP of 2008, but went wide at the final corner on his last lap and failed to improve.

Bottas also failed to find time on his final run, but his earlier lap was still good enough for third on the grid, just 0.036s adrift of Raikkonen's time.

Hamilton's first run in Q3 was compromised by a track position squabble with Nico Hulkenberg's Renault. Hamilton improved on his final run, but dropped a lot of time in the final sector and ended up almost half a second slower than the sister Mercedes of Bottas.

Daniel Ricciardo was fifth in the best of the Red Bulls, over a second slower than Hamilton, while Felipe Massa squeaked his Williams into sixth, just 0.051s ahead of the second Red Bull of Max Verstappen.

Hulkenberg was eighth in the best of the works Renaults, just over a tenth further back, while the Force Indias of Sergio Perez and Esteban Ocon completed the top 10.

Both Force Indias made Q3 for the first time this season, Ocon claiming the final spot in the top-10 shootout by 0.219s from the Toro Rosso of Carlos Sainz, who complained of a "very strange" lack of grip on his final set of tires.

The second Williams of Lance Stroll split Sainz from his Toro Rosso teammate Daniil Kvyat, as all three drivers lapped within 0.020s of each other.

Stroll failed to improve on his final run, while Kvyat had new brakes fitted for qualifying and made two attempts at improving his time on his final run, but couldn't do better than 1m36.1s each time and complained vigorously of oversteer at the end of Q2.

Kevin Magnussen's Haas was less than half a tenth further back in 14th, well clear of the underpowered McLaren-Honda of Fernando Alonso, who maintained his 100 percent record of getting McLaren-Honda into Q2 at every race so far this season but lacked the tools to get properly into the Q2 fight.

Renault's Jolyon Palmer missed the cut by less than a tenth, but had already failed to improve on his final run before crashing heavily at Turn 4 after clipping the inside kerb.

That shunt completed a miserable day for Palmer, who had to change chassis after an exhaust leak wrecked his car on Friday, before missing final practice to engine problems that required the engine to be changed so he could contest qualifying.

Stoffel Vandoorne found time on his final run but it was nowhere near enough to escape Q1. He would up 17th fastest and six tenths away from the Q2 cut-off.

Pascal Wehrlein was 18th in the best of the Saubers, lucky to survive a spin unscathed at Turn 13 at the end of Q1.

Teammate Marcus Ericsson was just under two tenths further back, while Romain Grosjean's Haas brought up the rear of the grid.

Grosjean struggled with the brakes and balance of his car throughout free practice, and was also unhappy at the start of qualifying, but was on a better lap before Palmer's crash nullified the end of the session.