Multi-mode central tire inflation would adjust the air pressure depending on the conditions.

Land Rover has patented a central tire inflation system that could make preparing to go off-road a lot easier. It might improve fuel economy, too.

Central tire inflation already exists on things like military vehicles and off-road transporters. However, Land Rover’s system offers a high-tech take on this idea that could inflate or deflate the tires to specific pressures depending on the driving mode. The switch could happen automatically based on sensor data or at the driver's request.

Land Rover’s patent illustrations show on-road, economy, off-road, and recovery modes for this system, and each of these settings would have associated tire pressure levels (see illustration above). The standard on-road would be the most common setting, but filling the tires with more air would improve fuel efficiency while cruising in the economy setting.

When going off-road, the system would first set itself to the legal minimum for use on the street. Once the driver goes below a certain speed threshold, the tires would deflate further. In a neat touch, when the traction control discovers the vehicle is stuck, the inflation system would release even more air from the tires to increase the contact patch with the ground. 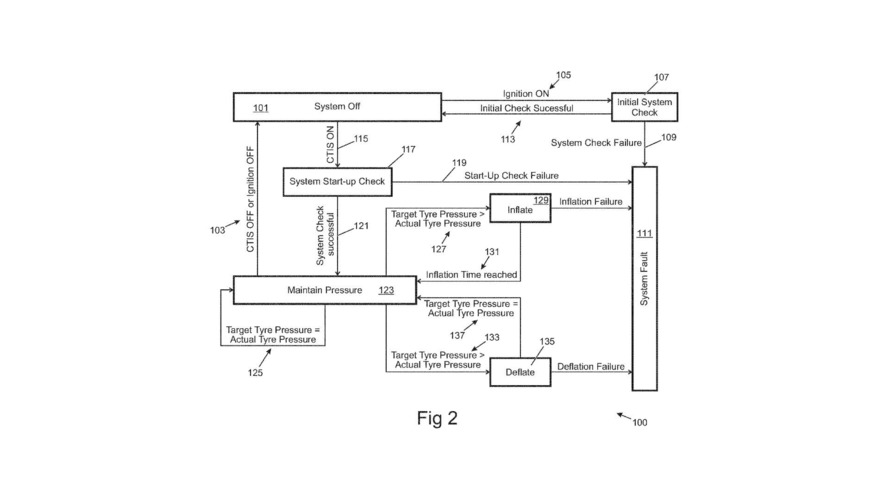 Land Rover’s tech would also correct for wear and tear on the system. As seals and valves wear over time, the system by over (or under) inflating the tire. This way the natural losses of air would eventually let the pressure reach the desired level.

Given Land Rover’s legacy of building capable off-roaders, this tech seems like a natural fit for future models.  Even if some buyers never go off-road, being able to brag about a central inflation system could be good marketing. Plus, it would any concern about your tire pressure being too low.