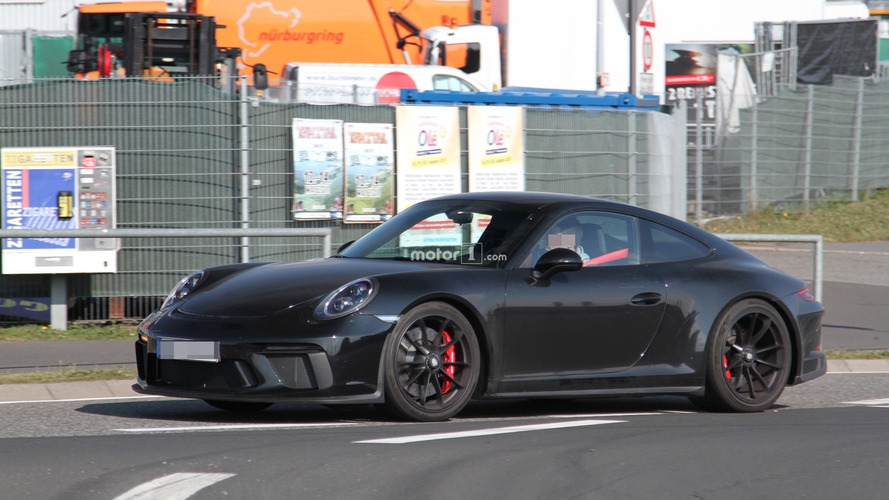 This wingless 911 GT3 really gets our gears spinning about what Porsche could be developing.

If you don’t feel like paying the inflated prices for a Porsche 911 R on the used market, a new batch of spy photos suggest that the German sports car company has a successor in the works. The mysterious test mule at the Nürburgring at least points to the company having a special project under development.

This vehicle features parts from the recently revised 911 GT3 like the updated front fascia and rear bumper. The wheels are also a dark-finish version of the units on GT3. Even the variant’s sport seats seem to be visible inside. However, this coupe lacks a giant fixed rear wing on the tail.

There’s no definite indication of this model’s powertrain, but the 4.0-liter flat six from the latest GT3 seems like the natural choice.

Creating a purely driver-oriented version of the GT3 without a wing is the same as on the 911 R. However, we’re curious how the company would make a new version special. For the R, the company was able to offer a manual gearbox, which wasn’t available on the GT3 at the time. Now, the automaker has changed course by giving buyers the option of having a clutch pedal on the hardcore model.

One possibility is that this could be the new limited-edition variant from Porsche Exclusive. The automaker’s customization division teased in a recent video that its team was working on a project for an arrival sometime in 2017. Perhaps the crew is putting some effort into an interesting take on the GT3.

Porsche’s engineering team is keeping quite busy at the moment. In addition to this mystery model, a new 911 GT3 RS is also under development at the Nürburgring. Plus, the turbocharged GT2 is lapping the ‘Ring, too. While some folks develop the final iterations of the current 911, testing of the next generation is already happening.