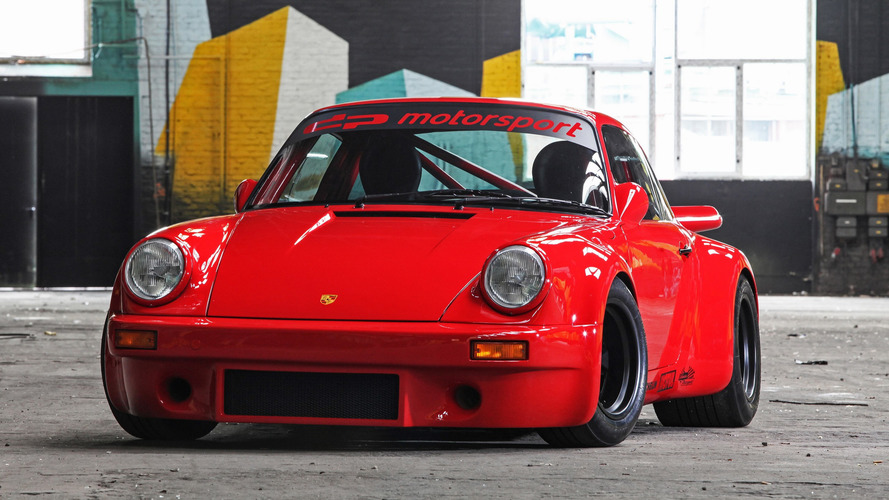 As it turns out, you can still teach an old dog new tricks.

Freshening up an old Porsche 911 is not an easy task to accomplish, but the aftermarket specialists from DP Motorsport have found the right way to breathe new life into this example. Basically almost everything that you see is custom made, with the tuner saying about 1,000 changes have been carried out.

Dubbed the “911 RS 3.5 Evolution,” the heavily modified sports car adopts a custom body made from a combination of carbon fiber and glass fiber reinforced plastic (GFRP). To keep the weight low, the doors’ windows are made from hardened plexiglass while the 80-liter fuel tank is built from carbon fiber. The end result is a 911 tipping the scales at just 2,072 pounds (940 kilograms, dry) — also possible by installing a lightweight motorsport-spec battery.

Once work on the tailor-made body came to an end, the tuner then turned its attention to some of the inner bits and pieces. As such, an H&R suspension kit was added, along with a brake system from a Turbo 3.3 model. The car now sits on 15-inch Fuchs wheels shod in semi-slick Michelin tires measuring 225/55/15 at the front axle and 335/35-15 at the back.

Output stands at 365 horsepower (268 kilowatts) after fitting the 3.5-liter engine with a dual ignition system, a mechanical fuel injection with individual throttle valves, and 911 RSR-sourced camshafts. The engineers also tweaked the Porsche transmission by shortening the gear ratios to boost acceleration.

After taking care of the mechanical upgrades, DP Motorsport focused on the stripped-out interior where there’s now a Momo steering wheel and a pair of body-hugging seats. A red roll cage and four-point harnesses were added along with even more carbon fiber to nicely round off the changes.

The tuner isn’t saying how much money were invested, but given the sheer amount of upgrades and the volume of work involved, such a package certainly doesn’t come cheap.

In 1973 Ekkehard ZIMMERMANN established the Porsche specialized company dp motorsport. During its 43 years of existence the founder gained many achievements with his dream cars. Doubtless, the crowning glory of his career was the overall victory – in cooperation with Kremer Racing- of the 24 Hours of Le Mans with a „935 K3“. World-famous are also his station wagon conversions – the so-called „Cargo“ - based on the 924 and 944.

Most recently, the Managing Director placed his entire design ideas into this 911 series G. First introduced to the public in 1974, the 911 RS was about to receive an optimization of perceived 1.000 details. The result is a 911 RS 3.5 Red Evolution.

The wheel housings, side sills as well as the front- and rear bumper were remodeled and improved at the body of a so-called „dp11 Red Evolution“ coated in Porsche guards red (80K). The windows of the lightweight doors consist of hardened plexiglass. Even the water drains were removed. At dp motorsport all body parts are made of carbon or glass fiber reinforced plastic (GFRP).

The vehicle inhabits a H&R suspension coil over system and adjustable dp-stabilizers type RSR. The front axle head bearings as well as the turbo rear axle guides are Unibal-mounted and the front axle PU guide sockets are supplied by Superpro. The dp motorsport welded strut brace as well as the brake system of a 911-3.3-Turbo deserves special mention. The wheel-tire-combination with Fuchs rims in the dimensions 9 x 15 are assembled with Michelin semi slicks TB in 225/55-15 on the front axle and in 13 x 15 with 335/35-15 on the rear axle.
The dp motorsport team equipped the 3.500 cm³ capacity engine with a mechanical fuel injection system with individual throttle valves, a dual ignition system as well as a 911-RSR camshafts. The result are a mighty 365 PS (=268 kW). Edelweiß Motorsport coordinated the mechanical fuel injection pump on a dynamometer. The transmission type 915 with limited slip differential, steel synchroniser rings and oil cooling received an elevated shifter and shortened shift travels.

Even the interior endured an extensive upgrade. While enjoying the Lollipop race seats in the 935 style, the driver looks at a 350-mm Momo steering wheel and a carbon styled dash board with carbon knee rails. The coated tin in the interior is furnished with a light-weight velor carpet style 964 RS. Ultimate protection for the passengers is provided by a welded, red coated safety cell as well as 4-point professional harness by Schroth.
Also the bonded windshield type 993, a light motorsport battery, a custom-made racing cable bundle and a carbon clubsport tank with 80 liters capacity are worthy special attention. The result of 940 kg unladen weight (without fuel) are remarkable!