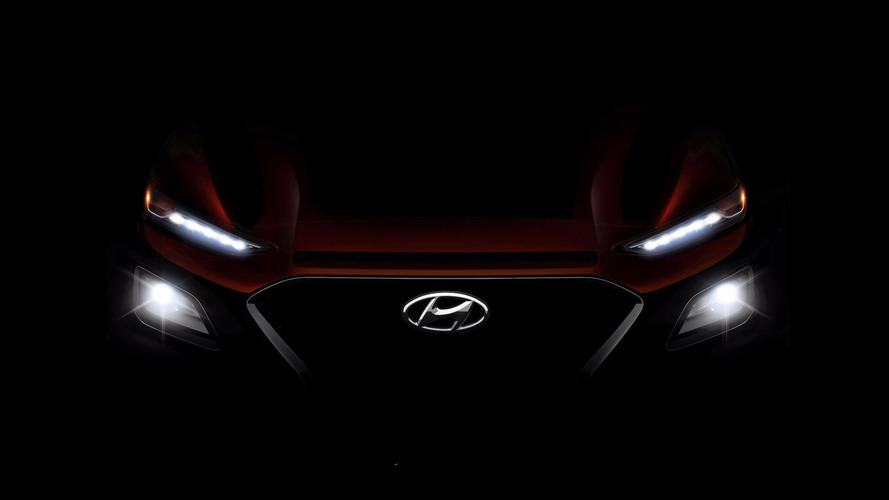 From this detailed teaser photo we can say the Kona will definitely have headlights and a grille.

Hyundai says the official unveiling for its all-new Kona compact crossover will happen this summer, but the manufacturer is feeding us some tidbits of info ahead of the launch. Seen here for the first time, the Kona’s front clip will follow the manufacturer’s new taste in design with the familiar Hyundai grille. The two-tier headlight arrangement we sort-of saw in spy photos is in full view; the top LED strips are dedicated daytime running lamps with amber lights at the corners. The lower lamps – also LED according to Hyundai – will provide the primary source of illumination at night.

The manufacturer goes on to say the design is “emphasized by the car’s wide stance and its voluminous, aggressive body styling.” The lines on the hood with what appears to be a center air scoop certainly suggest the Kona might have some snazzy styling when it’s fully revealed. Combined with the downward sweeping roofline we’ve seen in spy photos, we can visualize this as a crossover that could stand out against competition like the Mazda CX-3 and Nissan Juke.

There’s still no word on powertrain. The Kona is believed to use a modified version of the platform used by the Euro-only Hyundai I20 hatchback, with mechanicals possibly coming from the larger i30. That would mean gasoline and diesel four-cylinder engines ranging from 100 to 175 horsepower, most likely driving just the front wheels though all-wheel drive could well be an option. That would be especially critical in the United States if Hyundai hopes to match up against all-wheel drive competitors in the segment.

That is, if the Kona makes it to U.S. shores at all. There’s still no word on exactly where Hyundai will offer the Kona, and when it will be revealed in full.

April 28, 2017 – Hyundai Motor is unveiling further details of the All-New KONA ahead of its world premiere in the coming months. It features a progressive character combined with Hyundai’s new design identity which represents a unique proposition in the sub-compact SUV segment.

The All-New KONA’s front is expressive and powerful, adopting Hyundai Motor’s new family identity, the Cascading Grille. The new twin headlamps enhance the visual impact, with the LED Daytime Running Lights positioned on top of the LED headlights. The separated lights at the front deliver a confident, progressive appearance with sleek and sharp shapes. The bold front and rear are emphasised by the car’s wide stance and its voluminous, aggressive body styling.

The launch of the KONA represents the next step for Hyundai Motor Europe on its way to becoming the leading Asian automotive brand in Europe by 2021 with the launch of 30 new models and derivatives. With more than 1.4 million sales since the introduction of the first-generation Santa Fe in 2001, Hyundai Motor has established its credibility in the SUV segment and with the KONA the company is adding a fourth true SUV to its range in Europe.

Further information about the All-New Hyundai KONA will be released in the near future, with the official unveiling scheduled for summer 2017.