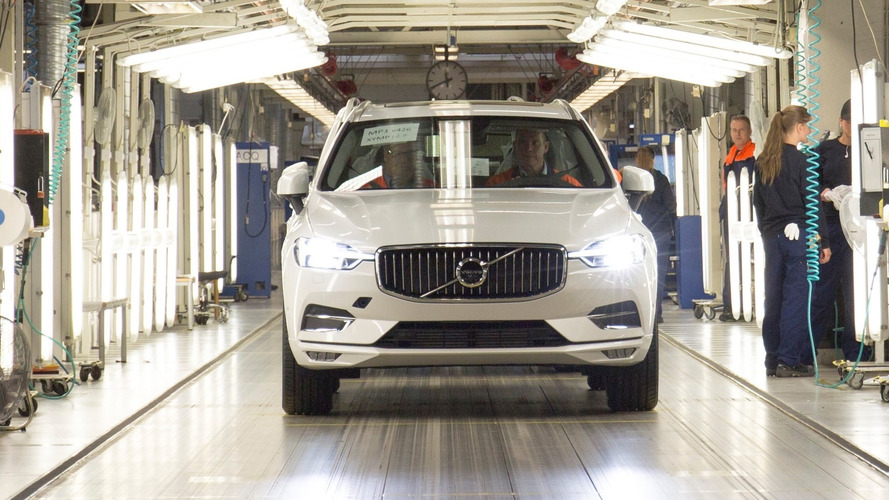 The XC60 accounts for 30 percent of Volvo's total sales.

Redesigned from the ground up, the XC60 midsize SUV is all-new and lovely for the 2018 model year. Volvo hosted the world premiere of its stylish high-riding vehicle last month at the Geneva Motor Show before bringing it to New York a few weeks ago for the U.S. debut. Now, Europe’s best-selling model in this hugely competitive segment is in production at the Torslanda plant at home in Sweden.

It’s the fourth vehicle to ride on Volvo’s new SPA platform and comes to replace the previous and very successful generation of which almost one million units were sold during the model’s lengthy nine-year life cycle.

The very first customer car to roll off the assembly was a left-hand-drive example featuring a Crystal White paint and built in the T5 Inscription AWD guise. That means it had a turbocharged 2.0-liter gasoline engine developing 250 horsepower and 258 pound-feet (350 Newton-meters) of torque channeled to both axles through an eight-speed automatic transmission. In this specification, the new XC60 needs 6.8 seconds to reach 62 mph (100 kph) and maxes out at 137 mph (220 kph).

For those in need of more oomph, there’s also a range-topping 407-hp T8 hybrid that’ll do the run in a mere 5.3 seconds and reach 143 mph (230 kph). Should that still not be enough, expect Polestar to get its hands on the XC60 to boost output and create a more aggressive design like in this speculative render:

As one would expect from a Volvo, the 2018 XC60 is packed with a tremendous amount of safety kit, prompting the Geely-owned marque to name it “one of the safest cars ever made.” One of the numerous options available is a semi-autonomous driving system working at speeds of up to 81 mph (130 kph) on well-marked roads. When activated, it will take care of the acceleration, braking, and steering.

Already available in some European markets, the new XC60 will arrive in United States later this year. Also in a few months, Volvo will introduce the first-ever XC40 compact crossover. Further down the line, there might even be a smaller XC20 since the company has already made it clear there are plans for a 20-series family.

THE FIRST NEW VOLVO XC60 ROLLS OF THE PRODUCTION LINE IN TORSLANDA, SWEDEN

The new car replaces Volvo’s highly-successful original XC60, which in the nine years since its launch became the bestselling premium mid-sized SUV in Europe with nearly a million units sold globally. The XC60 today represents around 30 per cent of Volvo’s total global sales.

“This is a proud day for everyone at the plant,” said Magnus Nilsson, vice president of the Torslanda plant. “We have worked hard in recent weeks and months to prepare Torslanda for this latest new Volvo model, and now we are ready to start delivering new XC60s to customers.”

The XC60 is the fourth model based on Volvo’s in-house developed SPA vehicle architecture, following the introduction of the top-of-the-line 90 series in recent years. The SPA-related investments in Sweden have had positive effects on employment at the company, as thousands of new jobs have been added in production, research & development and other areas.

Pilot Assist, Volvo’s advanced semi-autonomous driver assistance system, which takes care of steering, acceleration and braking on well-marked roads up to 130 km/h, is available in the new XC60 as an option.

But it is not just under the hood that the new XC60 delivers healthy performance. The new CleanZone four-zone climate system removes harmful pollutants and particles from outside the cabin to deliver Scandinavian-fresh air on the inside.

Volvo Cars’ driver infotainment and connected services offer, Sensus, and the Volvo On Call app both receive a graphical update with improved usability. As in the 90 Series cars, smartphone integration with CarPlay and Android Auto is also available.

With the new XC60 now on the market and gradually becoming available for order on markets across the globe, Volvo is set for another record year of sales in 2017.