This tech is as efficient as a conventional hydrogen fuel cell but doesn't require compressed H2 to run.

One of the major stumbling blocks for the proliferation of hydrogen fuel cells is that lack of infrastructure for refueling them. However, Toyota is now experimenting with a hybrid method that might solve the problem by using natural gas as the base fuel and incorporating a micro hybrid gas turbine into the system.

The structure for making this electricity generation possible is rather complex. The process starts by converting natural gas into carbon monoxide (CO) and hydrogen (H2). A compressor also injects air into the mix, and a chemical reaction through the fuel cell stack creates electricity. 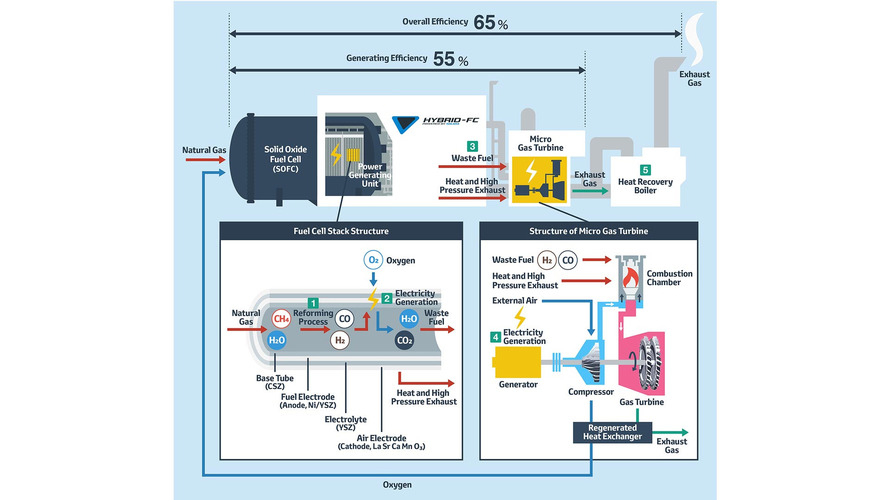 After this step, some H2 and CO remains as waste fuel, and this material goes to the micro gas turbine where a combustion process generates more electricity. As a final step, a co-generation system uses waste heat for producing additional power.

Toyota is conducting trials of the hybrid fuel cell at its Motomachi Plant in Japan, and the company is evaluating the system’s energy efficiency, performance, and durability. The automaker’s photos suggest this system is massive, though. According to the company, it produces 335 horsepower (250 kilowatts), which also doesn’t seem very impressive given the large size.

The automaker believes the hybrid fuel cell has a generating efficiency of 55 percent, and the waste heat co-generation system boosts the figure to 65 percent. For comparison, the United States Department of Energy reports the type of hydrogen fuel cells for transportation generally have generating efficiency between 50 and 60 percent.

In 2016, Nissan showed off its own concept for a hybrid fuel cell, but the company’s solution ran on ethanol. It was also compact enough to fit in an E-NV200 van. A 24-kilowatt-hour battery and 7.9-gallon (30-liter) fuel tank provided an alleged range of 373 miles (600 kilometers). The company planned to further evaluate the experimental drivetrain on Brazilian roads.

This hybrid system achieves high generating efficiency (55%3) with its two-stage power generation system, and also increases overall efficiency (65%) by using the cogeneration system. For this reason, Toyota has positioned it as an effective technology that would help to realize the goal of achieving a low-carbon society. The electricity and waste heat generated is used within Motomachi Plant.

Toyota will continue to promote the development and introduction of the efficient utilization of hydrogen technology in plants, while continuously monitoring the results of the introduction and demonstration results of this hybrid power generation system. This represents a progress forward in terms of initiatives targeted at reaching zero CO2 emissions in plants, which is one aspect of the Toyota Environmental Challenge 2050 which had been announced in 2015.

Application
A wide range of uses, from small-scale use (household) to large-scale use (plant power supply)

4 In aiming to put SOFC into practical use for commercial and industrial use, NEDO provided subsidies for R&D and introduction of SOFC.


Natural gas (CH4) is reformed within the fuel cell, and hydrogen (H2) and carbon monoxide (CO) are extracted.

Electricity is generated in the fuel cell through a chemical reaction that occurs between the hydrogen and carbon monoxide with the oxygen (O2) that is contained in the compressed air delivered by the micro gas turbine.

Waste fuel that is unused in fueled power generation (H2 and CO) is delivered to the micro gas turbines together with the heat and high pressure exhaust that is produced during power generation.

The waste fuel is burned in the micro gas turbines, and electricity is generated as it rotates.

Waste heat is collected from the exhaust gas produced during the burning process.